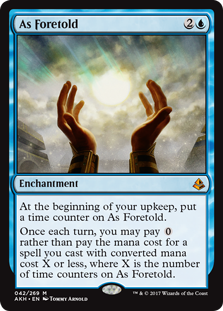 I have talked a lot about As Foretold and even a good chunk about Reason / Believe and I have been playing with both a whole bunch. While As Foretold has many applications in cube this kind of deck is one of the most common I find myself using it in. As Foretold is pretty nutty it turns out and isn't nearly as narrow as I expected. This list is probably a tier two deck but it is the kind of deck that loads of people love to play. You make loads of mana and draw loads of cards and get to control the game with countermagic to some extent. The deck is part combo and part control and feels like an old school turbo land archetype. It is a pretty new archetype in cube as it leans quite heavily on recent cards but as said, it does look and function a lot like things that have gone before it. With it using many new cards I have yet to fully refine my builds and don't know exactly the ways to go. Here is my best effort at an example list; 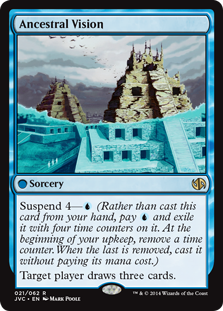 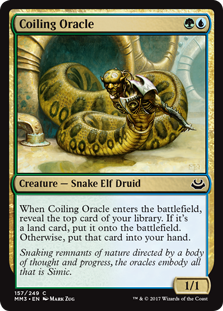 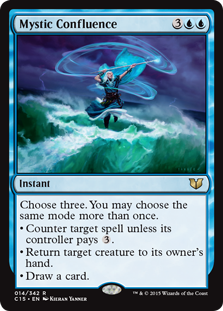 In this list the Shardless Agent should probably just be another fatty such as a Simic Sky Swallower or even just a Primeval Titan. It is lame if you hit countermagic and despite having loads of setup you don't want to have to rely on having it. Ancestral Vision is great with As Foretold so you don't need that extra push from Agent. The rest of the deck is based around stalling out so you can abuse ongoing effects from planeswalkers and other ongoing effects while getting up a nice high land count. Provided you are still in the game you will get to a critical mass where you just take over. You can easily setup kills that they cannot play around. Avenger and a Time Walk, Nissa ultimate or lock down with Eternal Witness and the Confluence.

The deck is a little fragile to getting swarmed by aggressive weenies lists. Having a lot of cheap defensive bodies helps you get to your powerful late game but lacking much in the way of spot removal does make a lot of tasks vastly harder to accomplish. You are not quick like many combo style decks and so you cannot just hope to outpace or avoid problem cards. If you can find the space to throw in something like a Walking Ballista it will make your life a lot easier. Even things like Crush of Tentacles can go a really long way in making up for lacking hard removal in your colours. 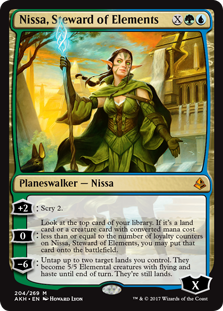 While the As Foretold is one of the best cards it is not a key one, you can do what it is doing with just ramp effect. You probably have to run some of them anyway as the low end is a little lacking and you don't have great ways to ensure you have the As Foretold to make. If you can make it on turn three or four, two if you are a luck sack, then happy days. It is pretty hard to lose if you are at all stable after making it. It is such an absurd amount of extra mana pretty quickly, especially when you can pair it with potent instants. Cryptic Command is a great card for this deck and should be picked and played if possible. It isn't essential and I didn't want to go overboard on non-essential high pick priority cards. While the BoP is such a card it is very replaceable or even something you can do without. Torrential Gearhulk is a mixed bag in this archetype. It has some great synergy with a lot of what you want to be doing with this deck but it is also lighter on targets that is ideal more often than you expect. It also removes that card from the game which is sadder for this deck than most. 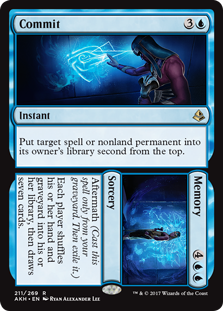 Nissa is a great finisher card that has decent synergy support and gains. She slots in perfectly to the list but is very hard to use properly. If you chose what to do poorly she will get you little value in the early game. She is also not essential. Either of the five mana Nissa would be totally fine cards for this deck as well and you don't want to go to overboard on same name walkers. More walkers would not be a bad thing in general for this deck. Four mana Garruk's are great as is Tamiyo.

The most key card for this list so far seems to be Commit / Memory. It is exactly what you want to be doing to stall the game on the front end for a fair enough price. Commit has proven to be more valuable than Venser as a disruption and stall tool. It is of course Memory that pushes this archetype super hard. It feels like starting the game with a Time Spiral underneath a Shelldock Isle. At some point you can just get a free full seven refill. The reason it is free is because you do it with the Gearhulk at the end of their turn should you be playing it or you do it when your As Foretold reaches six. Knowing you can go through your whole deck twice is lovely. Knowing you have the ability to throw resources around willy nilly because you have such a reliable and efficient way to restock on gas is a refreshing way to be able to play too. You greatly out power other decks through sheer mana and draw potential however your effective double library means you are not endangering yourself. 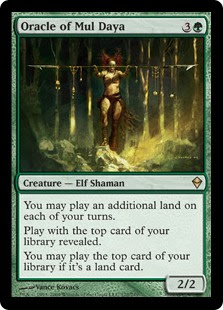 Mystic Confluence is another fantastic card for the deck as it does all the things you want a card to do. It is huge instant speed draw when you are flush with mana yet it is a potent disruption tool when you are tighter and struggling to stabilize. It also has potential for perpetual use under the right conditions as mentioned earlier.

Overall the deck wants a bit of counter magic and a smattering of other disruption. It wants a healthy amount of ramp, draw and library manipulation and it wants a couple of big finishers too. Having loads of card quality effects combined with the draw means you can plow through your deck pretty quickly finding the specific tools you need. It allows you to really abuse the library matters cards like Mul Daya. It is super rare to have every land in your deck in play (sac lands at least in the bin) yet this archetype manages it pretty effectively. That being said I often wind up with Primeval Titan in the list which helps a lot with that! 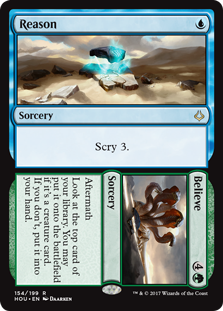 Reason / Believe is another perfect fit card for this list and its true power is really well showcased in this kind of deck. The card draw in the deck greatly offsets the initial card disadvantage and the mana production greatly empowers the aftermath option. You frequently have five plus counters on your As Foretold and can just fire it off for a free card. The library manipulation also helps empower Believe, I have had a couple of big hits with it and that is cute but ultimately not that important. In this list just getting the card back is all you really care about. Generally having seven mana to make a huge threat is the easy part! Having played Reason / Believe in this deck a lot now I have come to really appreciate the power of scry 3 over basically all the other one mana card quality spells as a stand alone setup card. It is subtly better than Serum Visions and the like and makes for much stronger follow ups with Coiling Oracle, Shardless Agent, Courser and new Nissa. It can setup a couple of turns as well rather than the one you typically get with other one mana card quality cards. I'm still not 100% sure I can justify Reason / Believe in the cube but it certainly is a stand out in this archetype.

There are a lot of ways to build this deck and lots of redundancy in the colours to help. Green has a lot of ramp, blue has a lot of counters, card draw and quality things and that makes up a significant part of the deck. Beyond that you can choose which synergies you want to run, what kind of problem solving tools you want and what things you want to allow you to win. This is the kind of deck you can just run an Emrakul as your win condition. You can Believe out the 15 mana one or just use it to carry on going through your library until you have enough to hard cast it. In such a deck you would want more looting effects. The Promised End could also be your main win condition and could be reliably hard card pretty quickly too. As this archetype generates a lot of mana you wouldn't need to focus on having super delirium options. Using so many new cards and being such a variable and complicated deck I suspect it will take a while to refine it and work out the best ways of doing it. I also expect that process to be incredibly fun!