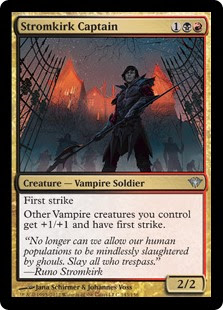 The vampire tribe has had a lot of love over the past couple of years. One of the awkward things about vampires is that they don't really have a theme. Most of the other tribal decks are focused around certain things or have a particular abusive game plan. There are plenty of good vampires but some are aggressive, some midrange , arguably even control. There is little in the way of "I win" moves that the vampires can do. Essentially vampires is going to just be a deck of dorks that work to improve each other. I looked at aggressive strategies but they lacked one drops. Not very many overall with lots of those being pretty weak. The same is somewhat true of the two drops. Lots of good cube worthy cards but nothing bomb like, nothing that screams out to play vampires like Priest of Titania in elves, Lord of Atlantis and co in Merfolk, Thalia's Lieutenant in humans, Piledriver and Recruiter and Lackey and Prospector and all the damn goblins. Even thought zombies have comparable low end they have various I win buttons at the top end to offset the weak low end like Grey Merchant and Bidding. 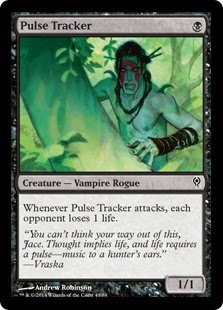 All this is to say that while I can put a pile of good cards all with the word vampire on them somewhere none of those decks look like archetypes. They don't look better than just playing something more direct without being restricted to vampires. Without a specific plan you are essentially either making an aggro deck or a midrange deck if you plan on using a tribe that has no combo elements or that is able to mimic other good non-tribal archetypes game plan. The good top end for a more midrange vampires list doesn't leave enough space to play the good non-vampire spells you need to have a good midrange deck, you either don't have enough low end vampires to support your high power vampire lords and such or you don't have enough low end power or interactive capabilities to compete in the cube setting.

When looking to build an aggressive deck the sheer number of cheaper cards you need really stretches the vampire pool thin and leaves you with a heavy reliance on not getting too disrupted. If your Pulse Tracker doesn't get buffed up by a couple of lords as the game progresses you are not going to get much out of the card. Equally if your Tracker gets pinged off your lords will not be carrying their weight. You could do a vampire aggro deck in cube and it would be fine, it would compete OK, sometimes it would look very powerful but on average it would be a little less consistent and powerful than any similar aggro deck without the tribal vampire restriction. 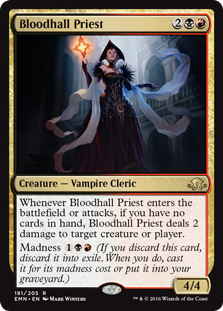 I claimed vampires didn't have a theme which is true in the way I meant it which was they do not have a specific plan on their route to victory. They do now somewhat have a theme and that is in the madness and discard direction. They also have a bit of sacrifice going on as well but that is less easy to support, less numerous and generally less powerful. While madness isn't a way of winning it is certainly something you can build around. It gave me some direction to work with and ultimately lead to the most satisfactory looking lists and reason to play vampires. I don't love this list. It would really benefit from some cheap things that made vampire tokens. It also has some cards with no synergy beyond being vampires just because they are very high power level and the deck needs that.

This list is still incredibly light on disruptive effects. Targetted discard is missing from this list, I would like to find some room for it but I really feel you need a high mass of vampires to justify the lords given you lack ways to cheaply get multiple vampires into play. The discard would be double effective as with so many discard outlets you rarely find yourself with dead weight in hand. More removal wouldn't go amiss either... 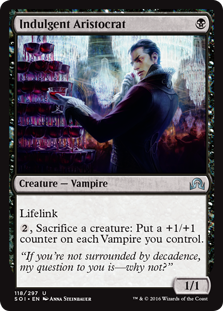 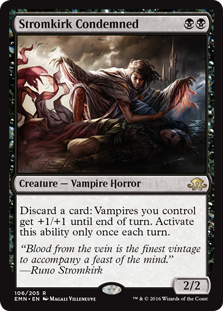 As yet this list is untested and is basically my guide for myself when I do come to try it out. This is why I have crammed in as many on theme vampires as possible and gone light on the generic cube good stuff. This actual list isn't very good but it will help show me which of the support vampires are least useful There are some super low powered cards I am not sure are needed like the Insolent Neonate and Ravenous Bloodseeker. There is also a lot of discard for tempo returns but little for card value. The list might need a Squee, Goblin Nabob just to keep on top of the discard needs! That or more raw draw potentially. I am sure I will be able to refine this significantly as make room for those much needed Inquisitions and Thoughtsieze! A somewhat proactive deck that has this little one drops is really terrifying. This likely needs a Forked Bolt and a Lightning Bolt on top of those discards to really compete. That will mean cutting out a lot of the support and filler vampires.

Vampire Nocturnus is insanely powerful but in a two colour deck I think it is likely too unreliable. My guess is that I need to cut him or swap a significant number of the red cards for black ones. With loads of scry it could work too but there isn't much in Rakdos, certainly not within the vampire things. Kalitas and Falkenrath Aristocrat gets in just for being really good and being vampires. I might be better off with less top end or more synergic cards despite these being two of the clear best stand alone vampires. I'm not even running original Olivia who is super potent but very slow and midrange. The newer Olivia offering is much more suited to a vampire themed deck as well as a more tempo driven deck. 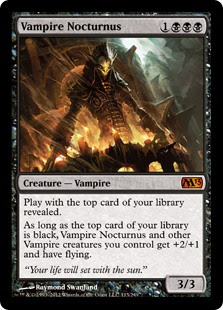 Tribal vampires has a lot of potential build options open to it although it would seem as if none of them are really quite there yet. This madness tempo list feels the closest by a good way at the moment but they all need more of the same kinds of cards to really get there. They need more viable one drops, either cards that are of comparable potency to your average aggressive white one drop or vampire versions of cards like Thraben Inspector and Cryptbreaker than offer a bit more utility and value past the early turns. Tribal vampires could also really really use a Raise the Alarm style card, even a Butcher Ghoul would get it done if it were a vampire... With just a couple such cards I think vampires will jump up the ranks of the various tribal options in cube and be a whole lot more viable.

Here is a list of some of the other cards I was considering either for this list or just as a powerful card with some potential in a vampire themed deck; 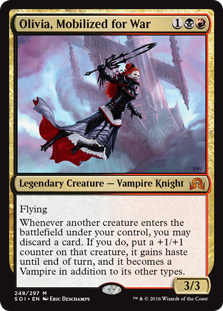