All-in Boros (an example of a new meta deck) 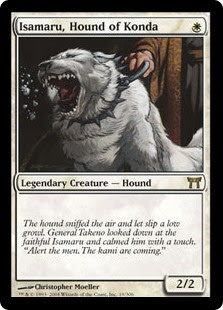 There has been a small shift in the meta in my drafting cube recently and it is the result of reaching a critical mass of things. The things in question are decent one drops. I like to support as many viable low end options in my cube as possible meaning I have way more one drops than most other cubes. There are only a handful of cards not in my cube which cost a mana and say any of the following; draw a card, tap for a mana, deal two damage to a target or just having two power! When I first built my cube shortly after of Kamaigawa  the release of  Isamru, Hound of Konda  was a big deal because it doubled the number of two power one drops white had on offer. Over a decade later and Isamaru isn't even in the top ten white aggressive one drops!

I like to push deck building to the limits as I find that is the best way to discover things. I have been pushing aggro decks lower and lower on the curve and as yet have not found a point at which it is too low in the cube. I am not saying a lower limit doesn't exists in principle. I am not about to start playing Memnite in my white weenie deck, not quite yet at least... It was doing sealed decks that first brought this new archetype, or style of deck if you prefer, to light. I would have pools with all the low end but not too much of interest higher up the curve. It is super easy to not play powerful bomb cards if you don't have them! I found that these aggressive decks that end their curve at two were performing better than the premium versions of those decks with all the best cards in them and that had curves ending at four. Rather than playing Elspeth, Knight Errant, Goblin Rabblemaster and other big names I would just play any old suitable one drop card. The resulting list would look really low on power, really lacking in ways to close out a game and incredibly vulnerable to a massive array of popular cube cards. A typical list would be 2/3rds one drops, mostly 2 power beaters, and 1/3rd two drops. As you are ending your curve at two rather than the more common four you can afford to do some fairly significant changes to your land count. I am perfectly happy playing 13 land in a deck like this and that is a huge deal for an aggressive deck. Playing 13 lands instead of 16 makes you nearly 20% more threat dense. You are still pretty likely to make lands for the first three turns you are also much more able to play off just two, even one land. You flood and screw substantially less than the conventional aggro builds as well as other cube archetypes despite the radical change in land count. Not only are you much more consistent on the land side of things you are far more consistent in your ability to curve out. You basically never miss a one drop and you should have options on what to make. You cast your stuff much more reliably and quickly than other archetypes. It is not unheard of to have six one drops in play on turn three! On the play that is your whole hand and pretty unbeatable without Pyroclasm!

It does feel weird passing bombs and taking a generic 2/1 but if it appears like a viable way to go then it is seeming like the optimal. It is the combination of having a huge early tempo lead and having so much stuff that makes this style of deck so potent. You can often just power through some of the conventional counters to aggro such as Kitchen Finks. Mass removal is generally game over unless you have done critical damage prior to one but the thing is that even a turn four Wrath is going to be too slow unless they are on the play. An aggro deck this cheap punishes anything ruthlessly. You are dead if you miss an early land drop against it. You are dead if you don't play something before turn three. You are dead if you don't have the ability to efficiently kill loads of dorks, set up a massive wall of defensive dorks or put something like a Wurmcoil Engine into play. Not only do you have to do one of these things you have to be doing it in the first couple of turns. Going first is a big deal in cube and gives you a decent advantage and this archetype is easily the one with the largest % swing. It is so powerful it punishes the coin flip before the game has even started! 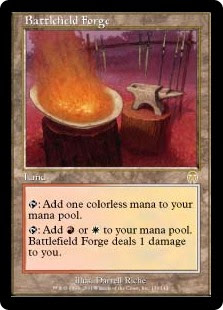 You can do these decks in most colours or combinations of colours. Your mana base is the limiting factor in any two or more colour decks. You really need every single dual that can come in untapped for this kind of things to be viable in multiple colours. That being said you need basically every one drop on offer to have enough things for it to be viable as a mono strategy in my one drop heavy cube! Blue doesn't have many tempo one drops and as such it is not possible to make a mono blue list list this nor does blue add that much to the two colour ones. Black, red and white have the most suitable things but green is a fine second colour. The issue with green is that most of its one drops give tempo via more mana and more mana isn't wildly useful in the deck that caps out at two.

These archetypes should increase in power as more potent one and two drops are printed. They may be hard to do currently as you need too high a % of either the dual lands or the one drops of a colour to put together a viable list. As cubes becomes more refined and better cheap cards are added to the pool I expect to see them more commonly built. The list below is an example of the most commonly found version. Red white dual lands are not that popular and red and white have the most playable aggressive one and two drops with a significant emphasis on the one drop side of things. You basically play any mildly on theme one drop while you reserve the two drops to be more powerful cards or those with more to offer your general plan. While Boros will be the most likely for you to encounter or have the option to do yourself this style of super cheap deck is viable in a lot of colour combinations. You don't need any one colour either, these are not Rx or Wx decks, just 2/X for one decks! I expect you could easily do these in three colours if you have access to some City of Brass/Mana Confluence style lands as well as the premium sacs and duals for the two colour pairsings in your wedge/shard. Just pick and play all the one drops and you are away! 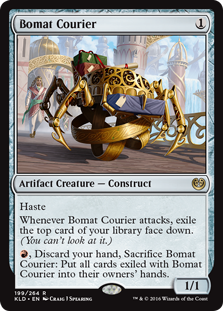 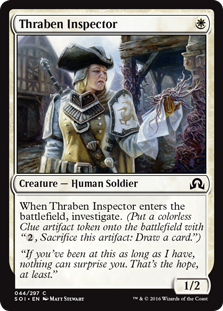 
I have fairly intentional used a selection of "lower tier" cube one drops in this example list to illustrate that it is redundancy over power. In this kind of deck the difference between a Goblin Guide (the best stand alone aggro one drop) and a Savannah Lions (the weakest cube viable aggro one drop) is pretty negligible. It is just about having enough things like that. In the more expensive aggro lists that curve to 4 and play 16 lands you need to get that much more power milked out of your deck as you are that much less threat dense and will expect to be in the game longer and as such facing off against more things of higher power. Even in those decks the difference between a Soldier of the Pantheon and an Elite Vanguard is more pronounced. 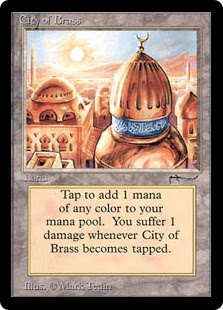 I also gave this list the best possible cube mana base. Arguably you could replace one of each of the basics with City of Brass and Mana Confluence and that would be better but due to the fact I run all these dual land cycles and more in my cube I don't have the need or the space for the more flexible multi-lands. Any way, this is the best mana base you could do in my cube and I have done this to illustrate how important your mana base is. The rules for drafting this deck are fairly simple, take one of these dual lands (or equivalent for other pairings) over anything else, then take on colour one drops over the rest and you won't go too far wrong. You may note that there are no man lands, the game shouldn't go on long enough for them to become relevant. The cost of lands that come in tapped is too high.

I used to think this kind of deck was only good if you had access to loads of heavy synergy cards that were not typically in drafting cubes. Goblin Bushwhacker is an example of such a card and while he does suit this list well you don't need them at all. Just a boat load of 2/Xs will get it done. It is a go wide deck in a lot of ways but rather than use token generators to go wide it just goes incredibly all in and dumps all its resources into doing so. Looking at this list you might think it would just fold to a lot of things and that might be the case if it were ever to happen. As this deck is so brutally fast the things it folds to come too late. Baleful Strix of one of the very best anti aggro cards but it doesn't do all that much against something like this. It will trade with a one drop. The two for one in cards matters not as the game is pretty won or lost before resources are much of an issue. The result is just a poor tempo play, better than doing nothing but a far cry from the best defensive two drop in the game. You need several cheap defensive things just to survive long enough to be able to play something that is actually effective! Kitchen Finks, another of the best anti aggro cards on offer is just helpless if you have already hit them for 8 when it lands and you can attack into it with five or more things. You need to ramp into a Kitchen Finks and then follow it up with something significant to stand a chance and this really shows why this style of deck puts out such good results. Your deck basically always does its thing and your opponents need quite a specific set of their things to stay in the game. It feels like playing poker except you are forced into betting everything at the start of each hand - definitively going all in! In addition to your forced betting you are dealt a pair of aces every hand.
Posted by Nick Nobody at 10:48