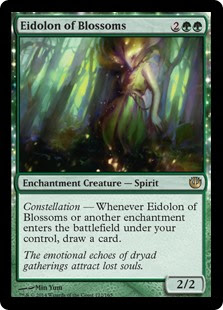 I first did this list when Theros block released a load of on curve enchantment creatures. There has always been an aggressive Enchantress list in cube using cards like Thuamatog and Auratog to secure wins. Those decks were never really competitive, they required you to draw just the right balance of enchantments and dorks while not getting your key cards removed. If they dealt with an Enchantress you ran out of gas, if they hit your threats you couldn't win. You would be running jank like Wild Growth simply to power your synergies.

With Theros came an alternate way to utilize enchantment synergies. With creatures posing as enchantments as well, with many of them being quite good, you gained a lot of flexibility in the deck. You could pack more synergy into the list yet still use more cards that have no synergy at all. Theros also brought a few cards that synergize very well with enchantments that make doing an enchantment themed deck all the more worthwhile.

This is essentially an agro Abzan enchantments deck. It has some reasonably weak spots in the curve and some weaker than usual creatures simply because it wants to include as many enchantments as it sensibly can. It more than makes up for these weaker cards with the various synergy cards it has. 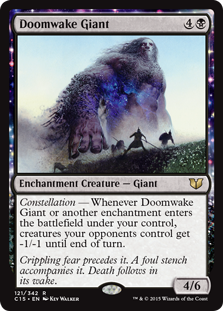 Firstly it has 3 enchantress effects which make it almost never run out of gas. So much so that Bow of Nylea is a necessary evil in the list simply to stop you milling yourself to death from too much card draw. Then it has Replenish, not only is this a one sided Patriarch's Bidding that gets back all your threats but it also triggers all your constellation effects. This can be a bunch of life or it can Wrath their board or just draw you yet more cards. The best thing about the Replenish is the tempo swing it can provide.

Survival of the Fittest is excellent in the list and another huge synergy piece. It can tutor up most of your things, powers up several more and makes for incredibly dangerous Replenish plays. The main difference between this list and previous enchantress lists is that this one runs mana creatures instead of the slightly less convenient mana enchantments. While the one drop mana dorks don't synergize with enchantments you want to lay them out before your constellation style effects any way. They do however synergize with lots of other cards, bestow effects, Survival of the Fittest and so on. Just being able to attack is pretty important in an agro list too. 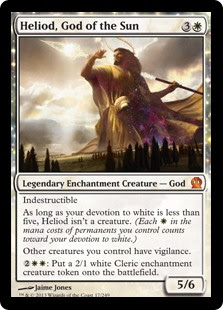 There are three other key cards in this list from Theros block. The first is Heliod, God of the Sun. While not very exciting himself he works perfectly in the deck. Serra's Sanctum has always been one of the most unplayable bomb cards. Even in enchantress decks you typically have little use for large volumes of white mana. With Heliod however you now have a very reliable grindy win condition, a source of constant constellation triggers and a great dump for any excess white mana.

Then we have the humble Strength from the Fallen which turns everything into something terrifying. One of the issues with the deck was low powered dorks. Doomwake Giant, the final key card, is a good solution to this as he can easily wrath all their superior guys out of the way to allow your limp ones to attack in for the win. With lots of small and weak guys, lots of card draw and lots of constellation triggers, not to mention with Survival of the Fittest, you have the perfect setup to abuse these humble little cards. 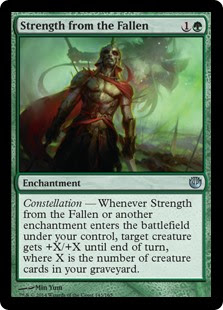 If you don't mange to win with the synergies and cheap cards then you have the equally powerful route of beating their head in with huge undercost fliers of which this deck has more than most. As you can see, the deck is brimming with power, threats and general ways of winning of the game. You can just play your stuff and win or you can setup a specific route to victory using the tools at your disposal.

You would expect most synergy or themed decks to have these kinds of options and power plays but you would also expect the deck to have some real weak spots as well. Things like affinity have incredible power but can get completely reset by cards like Pernicious Deed and Akroma's Vengeance. This list has far better recovery from complete board clears than any midrange or aggro Abzan list I have played with and is not set back much at all by mere Wrath effects. There are not many punisher cards that affect enchantments that are worth playing in cube. Tranquility is not a thing. Dromoka's Command is about the worst thing going and it really isn't a scary card. Bitterblossom
Underworld Coinsmith
Journey to Nowhere
Survival of the Fittest

Eidolon of Countless Battles
Master of the Feast
Herald of Torment 
There are loads of interesting cards that you can put to use in a list like this, more so than most unusual decks. Here are some of the stronger contenders 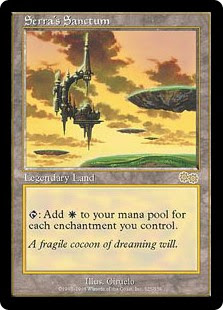 Heliod, God of the Sun is near impossible to turn into a dork in this deck but he is still a worthy inclusion. His role is dual purpose, he provides a source of ongoing constellation triggers as the 2/1s he makes are enchantments. The other inclusion, and why I run it over Sigil of the Empty Throne is that it is an outstanding mana dump for excess white mana. Serra's Sanctum is one of the most powerful cards that sees basically no play. In this deck you can make a lot of mana very quickly with it, perhaps not so quickly as Academy or Cradle but certainly a little safer than the Cradle and a little fairer than the Academy. In older enchantress decks you could generate an abusive amount of mana but have nothing of any real use to do with it. Now with Heliod you can use loads of white mana usefully.

While you can make the curve and the synrgies look better by using cards like Aegis of the Gods it turns out that actually weakens the deck overall. I found you were best of using more stand alone powerful cards or cards with a very specific role in the deck. Just filling up on random enchantment dorks looks far more aggressive but in reality often can't close out a game. I would be more inclined towards power cards like Starfield of Nyx (and perhaps more ramp) than padding out the low end with Sarcomancy and Spiteful Returned despite that being my instinct. 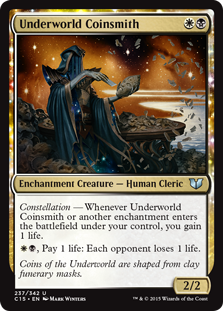 The list given has some easy cuts should you wish to experiment with other stuff. Bitterblossom's synergy only goes so far as it being a one off enchantment cast. It is trying to help the two drop slot but really isn't helping out in the way that a proper body would. It is decent with the Strength from the Fallen but so are the mana dorks and many other fliers you have on offer. Underworld Coinsmith is another easy cut. As a two drop it isn't exactly gaining you much tempo either. Ongoing life is nice but not something the deck is short on. If you are still looking to make cuts then it is one of the Enchantress Effects. You almost always want one but two is quickly more trouble than help! As you have Survival you can fairly easily tutor up 2/3s of them and so going down to two could be fine. As to which you cut of the three is subtle and not something I am going to bother going into. 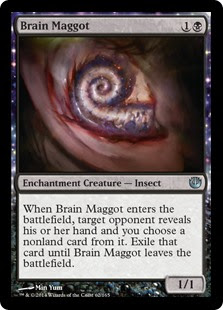 In a combo cube this is viable but will suffer hard from being clunky and relatively non interactive. In a midrange cube this deck is comfortably top tier. It slaughters aggro decks with loads of board presence, big things, cheap things, life gain, ongoing value and sweepers. It equally wreaks midrange by having that ever growing momentum feeling combined with the potential for power plays that provide for huge swings in the game. Control decks are not that much of a problem either although much more so than aggro and midrange. You have several must counter cards as well as lots of hard to remove threats complete with ramp and abundant draw. Time things well with this deck and you should come out ahead against all but those control players who have gone far far out of their way to beat you with their build.

These factors combined is likely why you haven't encountered a deck like this before. So many of the cards are unplayable outside an enchantment deck that you won't be able to draft this sort of thing in any but the weirdest cubes. The more a cube moves towards constructed styles the more it acts like a combo cube and so this style of deck looks less attractive despite actually having access to the cards you want for it. If you do get a chance to play it I highly recommend doing so even if it isn't the best meta for it. Just ram in a few more discard effects and some hate enchantments in the board and you should cope.