Wrote this a while ago but didn't publish as it seemed a bit long winded for what it was. Either way, I've not done much else so you can have this!

It has been a year in the cube now and the Flesh Carver is starting to establish his position in the cube. I have always been a huge fan of the card but most of the other people I play with have historically seemed to overlook it. It remained one of those cards people would pick up and read when you play it, then seemingly lose interest in what it does disregarding it for whatever reason as a jumped up Grey Ogre. 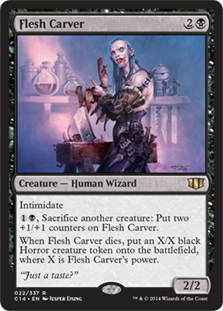 Black creatures are somewhat all over the place. They do a lot of different things, have a wide array of costs and fit best in specific places. It is hard to outright claim a ranking for the black creatures based on how good they are. It is all too circumstantial. Power wise it is hard to argue against things like Geralf's Messengers and Obliterator but they are not really playable outside mono black decks. Dark Confidant is commonly regarded as the best but he is still a card that very much needs to be in the right kind of place to be good. You do not see top end control decks packing Dark Confidant etc.


Tasigur is the other obvious contender for best black creature at present but it is really a Golgari or Dimir card. While Flesh Carver is never going to be the best creature in the deck or the most powerful black creature possible for a given situation he might well be the best on average across all the decks and situations possible. It is very hard for the card not to fit into a place somewhat well. The most comparable card is Kitchen Finks, a card that is comparably powerful as a control card as it is an aggressive one.

Finks offers a lot more tempo than Flesh Carver with better stats and a life injection however it affords less utility once in play. Finks is just stats while Carver performs a variety of tasks beyond being a body. Flesh Carver is a little slow to be a super aggro card and it isn't the most efficient defensive tool making it not the best 3 drop for a control card. Finks is superior in the aggro and control lists. Carver is fine in either as I shall get to but the real strength of Flesh Carver is as a midrange card where it out performs the mighty Finks quite a lot more than Finks outperforms it in aggro or control.

Carver has high efficiency and high utility while being a relatively cheap card. Having high efficiency and utility isn't that hard to find on a magic card but it is very hard to find on a card costing less than four mana. It is also the case that most of the cheaper cards that do offer both are somewhat narrow. Bow of Nylea isn't a great example of this as it isn't what I would call a cheap card. It does however illustrate well how a card can have high utility while still being a narrow card. Something that on face value might seem an oxymoron. Bow of Nylea does a lot of things but you can only play it a slow control decks, specifically ones that need both life gain and library refreshment.

Why is he so good? All the individual things don't look great, I don't play Penumbra Bobcat or Rotlung Reanimator in my cube and have not done so for quite some years now, I don't play Severed Legion and I don't even entertain Voracious Null. A 2/2 isn't getting much work done. It can't even trade with some of the top aggressive one drops, doesn't apply a threatening clock and typically to be worth three mana it has to do something really top rate in addition to the body. Trinket Mage, Shardless Agent, Dualcaster Mage, arguably Eternal Witness and Reclamation Sage as examples of powerful additions that make Grey Ogres playable.. Cards like Manic Vandal, Phyrexian Rager which used to be decent in cube have fallen well out of favour as the "free" body they come with isn't worth the mana. You are just better off running cheaper, more direct and more efficient cards that don't come with a relatively useless 2/2 such as Night's Whisper or Smash to Smithereens.

Even giving a 2/2 fear doesn't greatly improve it. Fear is a long way from flying and 3 mana two power fliers are struggling to perform in cube at present as well. Only the hasting red Phoenix cards are getting much play and they always feel really fair. It is the fact that you can increase the size of the Flesh Carver so as to significantly increase the value of the fear that makes that aspect of the card good. You don't even have to do it either, just the threat of being able to turn into a 4, 6 or 8 powered evasive dorks is huge and will incur removal sooner rather than late. Partial evasion scales better than you might think as you increase the stats. The selection of things able to get in the way was already small compared to that of a normal dork. You may not be any less blockable just from being bigger but you are substantially harder to trade with as well as the obvious being more important to block due to the larger damage output. By being big and evasive you reduce the pool of things that can effectively block you to a tiny fraction of cards. Pretty much you need a black or artifact with deathtouch to take down a determined flesh carver in combat.

So how good is 1B and sac a dork to put two +1/+1 counters on your Carver? In and of itself pretty bad is the answer but that is not at all how it works out. Sacrifice mechanisms always have some inherent power due to their ability to fizzle spells with non targeted perks like Lightning Helix and Electrolyze. You would sac things for no value a lot of the time if able so getting some counters is a fine enough deal. While it is more than no value you are paying a card and at least two mana for a mere +2/+2 on your dork. There are not that many good magic cards for cube that require you to invest further resources into them to improve them. Lotleth Troll is an example of such a card that seems good but in reality isn't all that.

Lotleth Troll is a card that only sees play when you actively want to discard creatures and even then it is only used when the deck is also quite tempo driven. More control or combo decks will prefer to use cards like Faithless Looting or Liliana to discard stuff as they afford much more value than Lotleth Troll for doing so. The main problem with Lotleth Troll is that you can invest a load of cards into making him a really scary threat only to have him Pathed and have your total basket of eggs stamped into an unsightly mess.

Exile and bounce effects still undo any investment made into your Carver but destroying it will not as the token generating effect scales with the power of your Carver. If you grow your Carver to a 6/6 only to get it Wrathed you will be left with a 6/6 token and not a useless 2/2 one. In this regard Flesh Carver is a lot more like Voice of Resurgence than it is Kitchen Finks, the second life of the card can be just as dangerous as the first. The token does not have any evasions which is for the best given how good the card is anyway.

While exile and bounce do in some ways counter Flesh Carver they are rare and premium. Your opponent will feel a lot more ripped off having to use their Swords to Plowshares on your Grey Ogre than you will be about not getting a token from it. You can pump your Flesh Carver at instant speed which gives you all the options and control you need to be able to outplay people and effects with it. If you get Wrathed you can dump all your extra dorks and mana into Carver so as to get a big token. If you fear bounce or exile you hold back on growing your Carver either waiting to respond to mass removal or waiting for your opponent to tap out or offer sufficient information for you to go all in for the kill with it.

Essentially, 1B sac a guy to get 2 +1/+1 counters is only weak at face value. The risk factor is very much mitigated by the scaling you get with the token and the ability to do so in response to things. The sec outlet is useful, the threat of a big evasive thing is scary, the ability to grow your guy to survive combat or removal also a significant perk.

Red decks hate it, they aim burn at it and it grows out of reach wasting the burn. They aim burn at other stuff and they get efficiently consumed in the ever more dangerous Flesh Carver. Even without any shenanigans a red deck is eating a two for one against Flesh Carver almost always. All told red decks do hate a Kitchen Finks more but at least you can kill it and carry one swinging past it after it has like 4 for 1'd you....

Flesh carver does all of these four things; a body with the potential to grow, a replacement body when it dies, evasion, and a sacrifice outlet. Each of them gives the card another angle for use, synergy and exploitation but more importantly each of them scales with each of the other inbuilt effects. It is a rare example of a single card that has multiple avenues of self synergy. The whole is significantly greater than the sum of its parts.