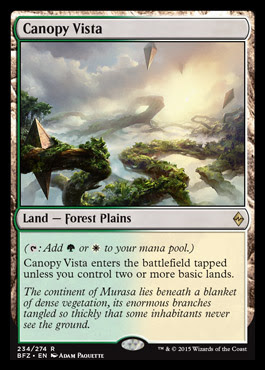 So I want to take a look at these new dual lands from Battle for Zendikar. They are obviously very exciting for cube as with only one copy of each card the additional redundancy for fixing fetch targets will make things a lot more reliable. They will obviously be going directly in the cube however I am not that convinced that they are all that good.

If you take away the fact that each land is two types of basic and start to compare these to the other dual lands available these struggle to make the top ten. You are never getting one of these untapped on turns one or two. Realistically in almost all three colour decks with half decent mana bases you are simply not going to get this untapped. In most two colour decks you will not be getting them out untapped till around turn five. You will be faced with awkward choices like fetching up basic lands to give you better odds on curving out or a dual to give you more casting options. In terms of power level in a vacuum these lands line up closest to the Mirage sac lands and the various tri lands. Unless you have specific uses for these lands then they will be some of the most likely lands to be left out of lists.

The potency of these lands rests rather in how much value you can get from having more lands that fulfill multiple basic lands types. There is the fetch lands, the ten good ones and the five weaker allied-only ones from Mirage. Then there is also cards like Wild Nacatl, Orcish Lumberjack, Vedalken Shackles, Rofellos and many more that have some interaction with basic land types. These two synergies have to make up quite a lot of ground before these new lands are close to out performing any of the Temples.

Let us look at fetch lands first. There are quite a few distinct situations where things apply differently. There are the more random formats like sealed and draft and there are those that are more alike to constructed. There are then also two and three+ colour decks which will also value these lands differently. In the more random formats these lands will be at their best, they will massively increase the odds of you getting a fixing combo of fetches and fetchable duals and stand to make things generally more consistent. In two colour decks in draft you basically play all your on colour duals however in three colour decks you can easily wind up not playing all of your duals. Assuming you got at least one appropriate fetch you are unlikely to be cutting your new dual land however this might well mean you are cutting a better dual land for a weaker one just to improve the potency of your fetch land(s), In constructed style events however the combination of these lands and fetches is quite a lot less exciting. You will have sufficient good targets for your fetches and would likely be better off playing more filter lands/check lands/quick lands/Temples/pain lands/basic lands instead.
Two colour decks in constructed will simply be faced with the choice of greater speed or greater consistency. Three+ colour decks shouldn't event get that degree of opportunity from these new duals. The best thing I can see these lands doing for the tri colour decks is allowing them to play a lot more fetch lands than before without fear of running out of targets. This is certainly significant but it is also quite niche. Overall, for constructed these will do very little to increase the power level in cube however they will do a great deal for draft and sealed but in consistency rather than power.

As a small aside it should be noted that these new duals improve the effectiveness of the check lands however the check lands do not return the favor and are worse for the new duals than a basic land. Overall the gain is decently weighted in favor of playing both check and new lands together but it will be a thing I spend too much time dwelling on in many deck building sessions to come.

Now we must look at the cards that these new duals work well with that are not lands. There are about ten in the cube but plenty plenty more in the B and C cube, some of which might get enough of a boost from these new lands to jump into the main cube. It will increase the power, playability and consistency of all of these kinds of card having access to the new duals. The thing is that you are paying a price to do so in having a land that could be much more potent otherwise as a good dual or a basic land. It is also effecting only a small number of cards in the cube which will make it irrelevant a lot of the time.

The biggest impact will be on the feasability of splashing a colour, particularly in decks that are using cards like Vedalken Shackles or Rofellos and as such need a high count of a particular basic. Even when you don't have such cards splash decks tend to have significantly more basics than non-splash decks of the same number of colours. Having more basics makes these new lands closer to the vacuum power level of check lands.

Another highly relevant point I have just thought of is that you can mitigate a lot of the awkwardness of the new duals coming in to play tapped because you can tutor for them with fetches allowing you to do so at the most convenient time. Often this window is used to save two life from a shock land but I suspect we will be seeing a lot more of it being used on these in the future. This fact again draws the new duals closer in power to the check lands but certainly not past them.

Presently having only five is no big deal, I am sure the rest of the cycle will see print eventually, if not imminently. Enemy colour decks certainly get a lot more power to the mana base in Battle for Zendikar thanks to the long awaited printing of the rest of the man land duals.

I am glad to have these new dual lands. I think they will prove a useful tool in deck design. They will also add great consistency throughout the various aspects of cube. Despite all this I expect to remeber far more games in which these new lands kill me than those in which they save me.