So this is just a very simple rock deck infused with the goodness from MtG Origins. Although I mostly built it with Liliana, Heretical Healer in mind it was the Evolutionary Leap that brought the deck together hence the name. Leap is quite a subtle card and it lets you do a lot with your deck design. This list for example has pretty weak creatures and little in the way of game ending cards. This of course increases its consistency at the cost of trading down some power. The average power level per card in this list is lower than most rock decks, both control and aggro. Evolutionary Leap greatly helps you resolve the issues of trading down power. Firstly, it ensures that any chump combatant, no longer useful dork, or the target of removal turns into a fresh creature when you have the mana spare. This is effectively card advantage, Wrath of God is no longer a X for 1 against you but a 1 for 0 against them. Also, many of your guys have enter and leaving play effects which you can rattle through generating card advantage. Things like Wall of Blossoms and Satyr Wayfinder become quite exceptional, they are cheap and have an effect on the board if needed, if not they can be turned into something better via the Evolutionary Leap for nothing more than a few mana which is the second way in which it helps combat the reduced power level. Leap is card quality, you chose what you get rid of and so you will be losing weak things and keeping good stuff. This means that the average result in Leaping a dork is going to be that you get an upgrade. Better dorks is card quality as is knowing what is on the bottom of your library. 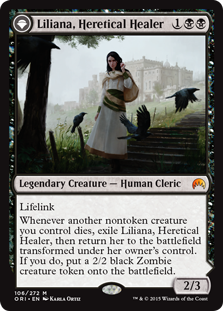 Getting the balance of curve and acceleration right is one of the trickiest things about a rock deck. Too much ramp and land and you will flood. Too little land and your ramp isn't doing what you want it to. The mana curve is low enough on this list that 16 lands (with the Wayfinder, Wall, Nissa and Courser) is fine. Given the mana curve however this list has a lot of ramp cards. This means I am not only very consistent but also very bursty, I should have a lot going on by turn three. Most bursty decks quickly run out of options and gas where again Leap shines and lets you carry on playing magic toe to toe with grindy control and midrange decks. Partly this is because, despite having a curve most similar to an aggro rock deck the cards it plays are those you would find more in midrange and control rock lists (and of course those found in all of them!). Bow of Nylea ruins any slow deck, Leap allows you to burn through your things very quickly while Bow lets you reuse those cards endlessly. Decking yourself or not winning in time is a real concern in 40 card decks. The nature of Leap in a deck like this with more weaker smaller creatures is that you will run out very fast. Without the Bow to support your Leap you are not as willing to over extend, not for card advantage reasons but simply through not having enough threats left in your deck. 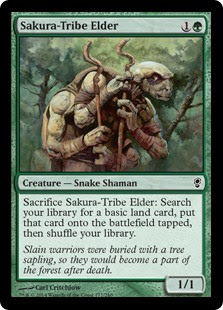 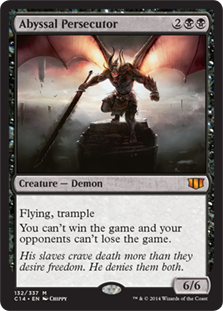 This list is also very flexible. You could change the Courser into a Yavimaya Elder, you could throw in a Scavenging Ooze instead of something and the deck will function much the same. There is a heavy sacrifice theme going on which supports the new Liliana very heavily but also allows you to play Abyssal Persecutor without concern. It is exactly the sort of reach card decks like this need to punch through and actually win a game. The creatures are far too utility focused in a deck like this to be able to outrun any problems like a Gruul deck so easily can. A Gruul deck with a similar curve to this will be able to close out a game without having evasion or specific threats like you find in a control deck. While this is not a control deck as such it does need to play creatures with the specific aim of being able to win a game rather than just gain advantage or solve a problem. Siege Rhino is a good card in this role, as are planeswalkers like Sorin the Solemn Visitor, Elspeth the Knight-Errant. Titan's also get it done and can be found outside of white! Persecutor probably would have wound up as a Titan if I didn't have the abundance of sac outlets for it. Flesh Carver is also a reasonable means to break a stalemate or close a game while also being a good support card for the deck and a great stand alone card. 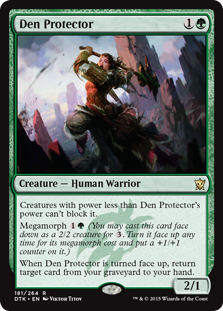 I do not often pack both Shriekmaw and Skin Render in the same list however Leap only finds creatures making it poor if you are looking for removal effects. I wanted to be able to find a broader range of utility while saccing guys to the Leap hence playing both. The same logic applies to the Den Protector and Eternal Witness in the list. The applied enough pressure that I was a little overkill on the lifegain and should have cut the Thragtusk for something like an Acidic Slime, again for the same removal utility logic.

Ophiomancer is nutty good with Evolutionary Leap and was an oversight for this list. I'm not entirely sure what I would cut for it but it is a worthy inclusion. Vampiric Rites would work well in this list too although it wasn't even spoiled when I made this deck. The Leap is much better as you have such a good and diverse creature count for one however it is mainly because you are deck planning on Leaping a lot and a Leap is half the mana to activate than Vampiric Rites.

This deck looks a lot like a Recurring Nightmare deck and indeed shares a lot of the same cards. You could happily play the Nightmare in this list and it wouldn't be bad at all. You could also tweak the list a bit and have Nightmare be very good indeed! The thing is, while Nightmare is a lot more powerful than Leap, it takes a lot more setting up and is narrower in what you want to play with it. Leaping fits in a lot better with just doing normal stuff. This allows the Leap deck to be able to generate a smooth, cheap, and ongoing advantage while doing what it needs to be doing. Nightmare can be clunky, it is usually the only thing you are doing in a turn (aside from the effects of the creatures entering and leaving play). 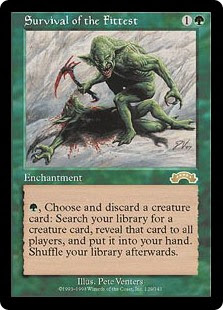 All in all I am very impressed with Evolutionary Leap. It is easy to include in lists, cheap to use and very effective and offering utility and advantage as the game goes on. It feels a bit like Sylvan Library, a card with no impact as such on the board and that is slow to take effect but that will win out in long games and has some powerful synergies with certain cards. It will sometimes be hard to justify playing cards like Leap when you could just play a Tarmogoyf or something instead that does a fairly significant amount of stuff to the board! Leap may seem like it is just a slow and ureliable Survival of the Fittest but it really really isn't. The cards do very different things. Leap has a significant effect on the game, your opponents choices and the potential interaction between the cards in play. Survival has barely any effect on what is in play and is more like a Tutor card you use for specific purposes or synergies. Leap is a utility tool you can do a lot more with in a lot more situations. Survival rather suffers from diminishing returns while Leap suffers less. So often with Survival you discard the lame elf to go find the best card in your deck and flop it out. Then they deal with it and you draw a land, have no more guys to pitch and are pretty sad about it. With Leap you always have another guy waiting for you.