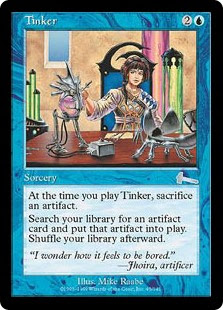 Reanimator is a deck that can be done with many different slants, in fact almost all of the cheat in creature style combo decks including Oath of Druids, Sneak Attack, Show and Tell, Tinker, Goblin Welder, Natural Order, Living Death, Recurring Nightmare and even to some extent Flash have some overlap with the other methods. As you only have one of each of the key cards it is often best to take two or so of the methods and use cards that work well with all of them. This gives you a more consistent combo deck and doesn't restrict your card choices that much. I have already done a reanimator list which was three colours and used Goblin Welder and Recurring Nightmare on top of the usual reanimator package. This deck is just two colours and, as per the title, goes with Tinker. It also has a Living Death somewhat jammed in as more of an answer card than any thing else. The other list I did could also have played Tinker however it would have been fine rather than good. This list has many more targets for it to get and win with as well as a higher artifact count for ease of sacrificing to make the Tinker option at least as good as the Reanimate ones. 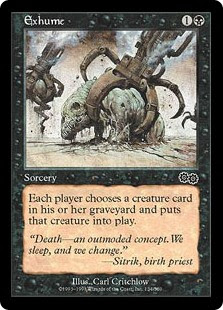 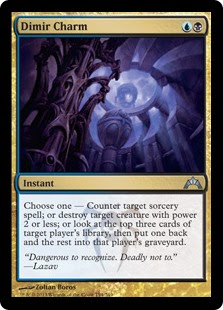 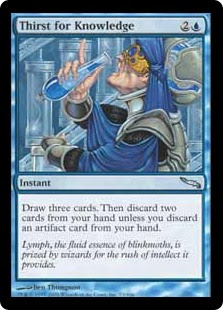 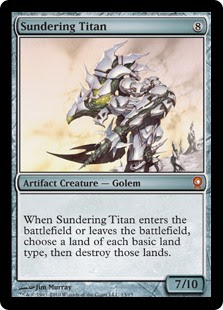 I'm not going to drone on too much about this list or the archetype as the main purpose of this post is to start to give some depth to the various top archetypes in the cube. I have always found comparing deck lists that are trying to do much the same thing within the same format to be rather educational. Because of the inclusion of certain cards you can easily see why others have been included and can appreciate many of the strengths of the various cards without having to do the testing yourself. This is most useful from something like a Pro Tour where the various decks are typically well tested by good players but also often in isolation. I probably would have played both a Snapcaster Mage and a Brainstorm (over the See Beyond) if I had access to them but they were in other people's decks. The list was rather tight as it is with a relatively risky mana base and very little in the way of solution cards. There are loads of cards like Worship that this list can't beat which makes for a very consistent deck in goldfishing but never quite so robust in actual play. I tend to prefer having a safer clunkier deck but with this sort of archetype (something trying to kill fast) neither is always right. I am not sure what I would take out for the Snapcaster let alone for some solution cards like Cyclonic Rift.


I played Cabal Therapy to enhance the playability of Living Death but also because it is a good card to deal with things you know you can't beat. The Baleful Strix was one of the more luxurious cards but worked well with the Therapy as well as all the artifact syenrgy cards and provided a good bit of early safety. It is just one of those cards that is so good you feel wrong not playing it. Dimir Charm was also filling a disruption slot in the deck but also making up for a slight lack of ways to put things in the graveyard. With not looting effects or Careful Study the least consistent aspect of this deck is getting a dork to Reanimate in the bin early enough. Dimir Charm can help out in this respect if needed while providing a decent array of other disruption and protection abilities. The only other cool thing to note about the deck is how brutal the Urborg, Tomb of Yawgmoth is in combination with Sundering Titan. Not only does it protect all your own swamps but allows you to snipe out any land you like from your opponent including non-basics.