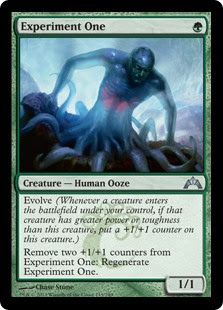 I have now had a chance to do both the mechanic themed decks from Gatecrash that I wanted to. Unsurprisingly evolve did not perform well, perhaps more surprisingly it didn't even outperform the extort deck. This I suspect was down to the way I built the decks as blue green needs a lot more nurturing to be able to cope without good creature removal and I kind of ignored that aspect and built as if I was only really going to be goldfishing the deck. As such it rather folded to disruption or power dorks like Olivia Voldaren. I still hold out that evolve is better than extort for cube however they are much closer in power than I first thought, and that power level is definitely not archetype worthy. Sadly it also isn't really worth investing much in synergy cards to go with it either and will likely only see play on the few card that are cheap and powerful. Obviously for evolve you need to consider your creature count that will be able to evolve your evolvers and for how long after they have started growing. Beyond these considerations which are pretty much made for every category of card to some level there will be little merit on putting in things that specifically abuse evolve unless they pretty much go in the deck any way. It is good to have OK guys getting slowly better as a game goes on, it is not OK to overly rely on these fine dorks to make other cards in your deck good. 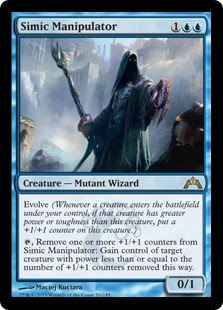 The idea behind this deck was simply all the cheap playable evolve guys with as many dorks that would evolve them effectively as I could cram in. This was hard as big guys evolve more reliably but cost lots while little guys that ramp your mana barely evolve anything. With all the extra evolve guys and then those to support them I had little room for much utility or solutions so planned to just try and get tempo wins. One of the problems with this is that your evolve dorks are small to begin with and so very easy to get dead and you don't want to trade off your late game win conditions so you apply less pressure than agro decks should. The other thing I found with evolve guys is that it makes you want to curve really awkwardly and consequently makes you lose tempo and mana efficiency. You almost never get a smooth curve of evolve dorks that do much to trigger each other. One evolve dork along your curve would be no trouble but trying to get a few on the go hurts you more than it gains you most of the time. While you are vulnerable to cheap early removal you are also savagely vulnerable to mass removal as you have to extend onto the board so as to make your early evolve plays not utter rubbish. As such you run into a Wrath and have less chance to recover than normal as you need to be extending again and can't due to lack of cards left.

Here is the list I ran, it was full of stuff to try and get the best out of my evolve guys so as to see how they might look under optimal conditions more frequently but this was at the cost of stuff to make my deck durable which meant it did a lot of losing and showing me how evolve cards look at their worst. To get a feel for how evolve at its best will look will require patience as it will likely only occur in a few decks that have only one evolve dork in them and very few cards that do more than just evolve them once. 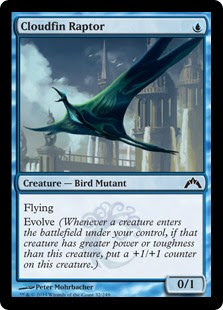 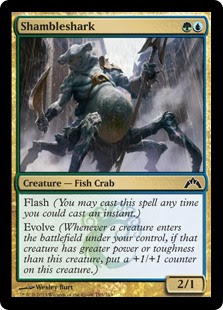 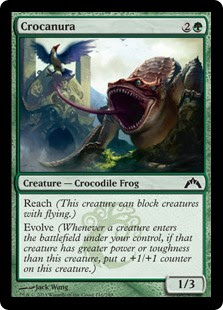 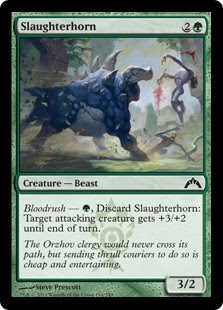 I did at least get to try out a load of the new cards in this list which was fun although sadly not that promising for those cards. The Slaghterhorn's restriction on when it can be used as pump is far more annoying that I thought it would be, had it been a +2/+2 pump I could use as an instant I would have won a game I instead lost. Given that he needed to be pump first and a dork second and his pump is overly restrictive I feel he will quickly go to the C cube. The two one drop evolvers performed the best although were typically killed with removal before they grew more than once and so never really managed to get to the unfair stage. I stand by Cloudfin Raptor being the best evolver by far and one of the best cards in the set. It will require more testing to see if any more of the evolve guys are to permanently join the Raptor in the A cube. Experiment One was decent and reliably hit for 2 on turn two but was harder to evolve than Raptor and had poor synergy with mana dorks. Presently he doesn't really have a deck other than perhaps Zoo or RG beats than he goes in and it is doubtful he will become a mainstay in either of those and really requires a mono green agro deck to become better than tier two in order to keep an A cube slot. 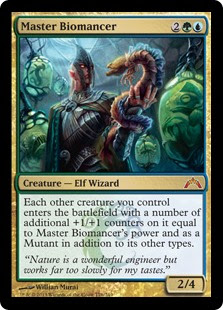 Master Biomancer was fine but not a sleeper bomb card like Sublime Archangel. The fact that he enhances the dorks you make after him and has no effect on those already in play makes him far less potent. In a top deck situation he is just an overcost dork most of the time. In curving he forces you to make him early to make him any use at all and this can cost you in tempo. His dependence on other cards to become powerful makes him average at best and likely to fall to the B cube. I would rather have Edric so as to make use of card already in play and Edric is not all that impressive. Crocanura was the third best evolve dork and might well keep its slot over Experiment One should it find a deck or more that generally want him. Being of thee toughness he is quite safe prior to growing and with only one starting power he is also easy to grow. In all games he was a 2/4 before his first attack and generally made it to a 3/5 within three turns at which point he is getting rather serious. He is far from broken but it solid enough and could well fit in some unusual and under catered for places. 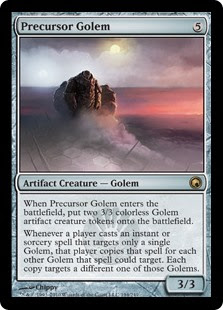 Not that many cards work abusively well with evolve even if you did want to try and abuse it against my advice. Proliferate is too expensive and slow and dependant on you having several evolved guys to be of much value. Other cards that abuse counters are all a bit tenuous for an agro deck to get value from and so it was only really down to good cards at getting things to evolve. The high toughness walls were nice as they were cheap and able to evolve stuff that was out of range of the other 3 or less mana dorks however they are not exactly good agro dorks and the fact that they were good in the deck just proves the deck is bad more than anything else. Precursor Golem was epic for evolving dorks and was by far and away the best way to support the mechaninc and I suspect any similar sort of card would be similarly good. Getting to triple pump something active while making an army felt powerful.

I played Opposition simply because the deck looked like it could never win without it or a savagely bad draw from the opponent. In reality the deck didn't really have enough dorks you wanted to no attack with to really be much good but it did sort of cover most bases in terms of the many things like creature removal and disruption the deck lacked. The Aether Vial wasn't great for me and the whole Trinket Mage package was an overly wishful attempt to patch up a sinking ship and would likely have been better as fat dorks. Both Gyre Shaman and Simic Manipulator seem too vulnerable and dependant to be anywhere close to cube worthy and Shamble Shark is too low power for a gold card to cut it either. Some mechanics can be made into fun viable themed decks such as madness or proliferate but I don't think evolve can be. If you want to play with evolve cards build already established archetypes and put in one of Experiment One, Crocanura or Cloudfin Raptor as appropriate or lose horribly as I have done.