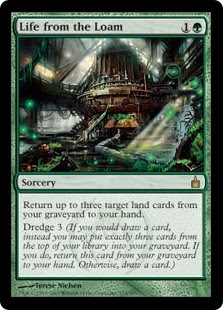 This another incarnation of the tediously slow green based control decks. I find the three colour variations best in that they are still very consistent compared to the more stretched 4 and 5 colour versions and still give you lots of scope within the build. Another advantage to minimising the colours is that you don't have so many auto includes which makes the build more interesting and more diverse.

My original plan for this deck was to have more planeswalkers and more things that can be used from the graveyard like Chandra and her Phoenix but I ended up playing a Gifts package and a Trinket Mage package as they had better synergy with the deck overall. Genesis and Phoenix are nice and do work in the deck but neither would be at their best and in many ways are not doing what the deck  does in order to win and so are not worth playing despite the ease of getting them to the bin. The premiss for my doing this deck was trying to abuse Forbid and Squee in a deck more capable of finding them and supporting the buyback than UR decks or URb decks that have previously made most use of Forbid. This is the list I ended up playing: 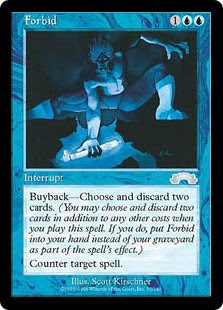 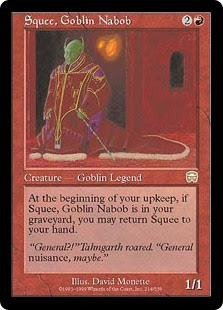 Raging Ravine
Grove of the Burnwillows 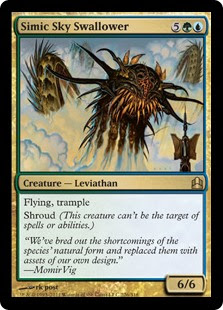 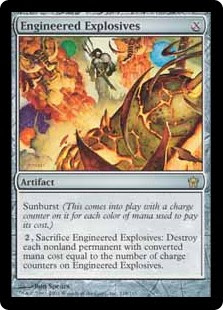 The deck performed well for me managing to win out from one life more than once which is always galling for the opposition. There were a few bits I mis-built, firstly the Exploration should have been either a Bird of Paradise or a an Explore, you simply don't have the gas to be able to consistently make two land a turn. The Negate should also have been an Arcane Denial. I was a bit on auto pilot and in the UBG version of the deck you have much better creature removal making Negate the better card as giving up card advantage is a little painful as it takes so long to recover it. It turns out in this version that dealing with dorks is much more of an effort to the point of me also wanting the humble Unsummon in the deck too although instead of what I am unsure.

The Gifts Ungiven was a little luxurious and could have been cut for something with a bit more presence such as a Cryptic Command or a Jace, the Mind Sculptor (also helping to cover the desired bounce). Regrowth could have been a Snapcaster Mage and was really only in the deck because of the Gifts however the exile aspect of Snapcaster is deeply unpleasant as each of your spells are quite important in being able to survive and win eventually. 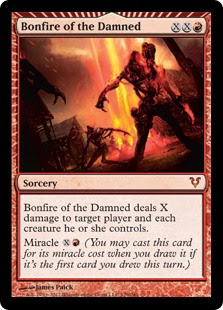 The Trinket Mage package was another aspect of the deck I didn't need to include but had good synergy as I would be playing the Mox Diamond and Divining Top regardless. The Engineered Explosives were a great addition in the end and gave me redundancy in mass removal as well as more targetted removal. Losing Pernicious Deed with not playing black is pretty significant and while Explosives is no way near as good it does just give you that extra bit of security.

The deck spends the whole game frantically searching for the few answer cards it has and trying to stabilize. As it is only 40 cards and is full of card quality, draw, tutor and regrowth type cards it is pretty easy to get what you need. The bigger problem is being able to cast it all in time. This makes the deck one of the very hardest cube decks to play with almost every game against every matchup presenting you a decent challenge and a pile of different things to try and cope with. The black version is better able to be tuned to beat agro, beatdown or control with access to discard or great removal however this less powerful version is still very much a tier one deck and is more able to cope with a diverse meta without specific tuning. Bonfire of the Damned is proving to be a really impressive card and is showing up in a lot of decks, it felt like it was one of the most powerful and key spells in the deck rather like Death Cloud in the black version but never harming your position. The Sky Swallower was also a stand out card in that it is very hard to deal with and a rapid finisher. The card quality made me happy to play a dedicated threat although I have built these decks without any proper win condition relying on man lands, small utility dorks, planewalkers or concessions through bordom to end the game.
Posted by Nick Nobody at 06:28