I have managed to pull myself away from Diablo 3 long enough to play a quick cube and write up a quick analysis of one of the decks. Having given up competitive magic due to a serious World of Warcrack habit that cost me two years of my life I am highly wary of this new incarnation which is rather like the methodone of WoW...


There are many incarnation of The Rock in the cube and the archetype is diverse enough to warrant multiple features. This is one of the more popular builds of the deck of late although with Rock decks more than any other deck your build is very dependant on what you are trying to beat. Rock can beat anything but it will rarely have matchups greatly in its favour and does struggle to beat an entire meta, even if that is just two decks. This version of Rock is hinged on Birthing Pod and Recurring Nightmare and is very easy to mix up with Survival Rock due there being huge overlap in cards and much of the synergies. These engine builds of Rock tend to be the most midrange archetypes of the Rock. They have high creature counts to fuel the engine which makes them unable to act like a pure control deck despite having a strong late game due to the inherent card advantage the engines offer. With so many slots filled with utility dorks and engine cards there are few slots for efficient disruption like discard or removal. 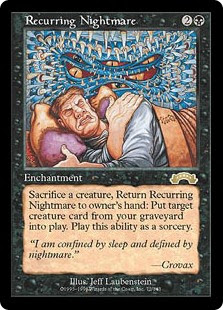 Conversely despite having a very high creature count the deck will never be as quick or streamlined at goldfishing or being aggressive as the pure agro decks that exist in the cube as it will be slowed down by the engine cards and pricey utility dorks. The inability to out control the control decks or race the agro decks is not at all a problem as the beauty of most Rock variants is their ability to easily take up the mantle of the control or the agro player dependant on the matchup or gamestate. No other deck can so effectively play in a completely different style and do it so well and the midrange rock decks do this the best. When you face a control deck you try and beat them up and when facing an agro deck you just try to control and slow the game. It makes the Rock very interesting to play, most so in a matchup where both decks are somewhat midrange and who the is aggressor fluctuates a lot. 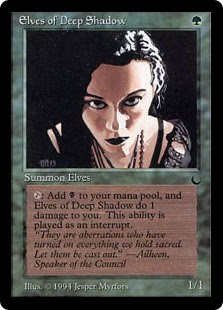 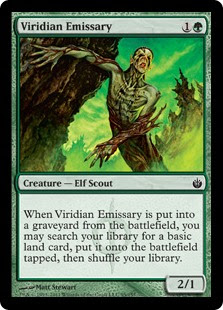 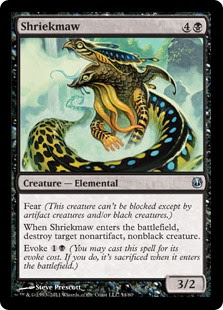 While this deck came to be after Birthing Pod was printed it is in many ways just redundancy for Recurring Nightmare. The Pod is much more effective in the early game but does quickly lose power as the game draws on. It also heavily requires you to build around it unlike the Nightmare which can be chucked into lots of decks. Because of Pod I wanted to play as many creatures as possible with a very smooth curve relating to the converted mana costs of those creatures. This ensures the maximum longevity for your Pod without diluting the deck with ways to reshuffle your graveyards. With so many cantrip dorks and mana dorks I can get away with a lower land count than most Rock decks and being so ruthless on the number of non-creatures I played I could play I managed to cram in 21 dorks. Many of these however were expensive slow cards like Viridian Shaman to make up for the lack of answers I otherwise had due to such a low spell count. 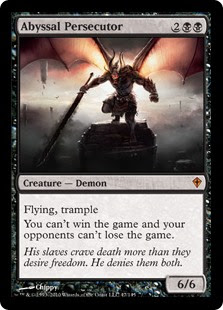 The Tragic Slip was probably the most cuttable spell and was played just to give me some early game and trickery. Had the matchups been different (mono white control and UGw junk on this occasion) I would have played a one mana discard spell instead. This would have made the Black Cat a lot better as it had no support in my deck from other discard. As the list stands it is probably the weakest dork I am playing.
I felt I was lacking a few things that I couldn't fit into the deck, the most notable was a creature way to sacrifice dorks which has a number of applications such as triggering Skullclamp. Carrion Feeder is my favourite for this role but is rather more aggressive than this deck is designed to be and so I decided to forgo this luxury. While this was largely fine it did make playing Abyssal Persecutor rather riskier than I normally like.

I also wanted a Fauna Shaman to give me a little more control with my utility dorks however it only having synergy with Vengevine and to an extent the Nightmare while being slow and vulnerable I decided this was also an overly luxurious card to add. Murderous Redcap should have replaced one of the four drops as it has better synergy with the engine than Skinrender while performing a similar role. At this point the deck starts to veer towards a Melira combo deck and I was not wanting to build that so just steered clear of it all. A Vampire Nighthawk was a card I found my self wishing I had included a few times and would have given me some control of the skies enough to drop the risky Persecutor from the list. 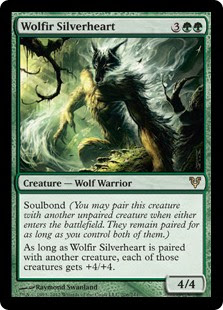 Brindle Shoat and Wolfir Silverheart were the new cards I was wanting to test. Wolfir took the slot that would normally be filled by Deranged Hermit and seemed pretty good although being so expensive often did not get played. The haste and scaling with other effects bonus four damage you get with souldbonding a dork to Wolfir is more threatening to your opponent than a Hermit and harder to play around. The greater total power and lack of echo are both in favour of Wolfir. His only real drawbacks compared to the Hermit are a weakness to spot removal and lower synergy with Overrun or Opposition however the extreme power to mana ratio of Wolfir is more than enough to compensated for this much of the time, you don't need to have an Overrun to just win with a Wolfir in play. The jury is still out as he mostly just a fatty and five drops get few slots in decks. Brindle Shoat was really good, much more so than I expected. It made you feel super safe against Wrath effects with no need to hold open mana as you do with cards like Caller of the Claw. Ontop of this it has great synergy with the deck as a whole and can work as a good speed bump or a pretty reasonable agro 2 drop. This deck does seem the perfect home for the Shoat and so it remains to be seen if he will make it in any other archetypes and get an A cube slot confirmed. 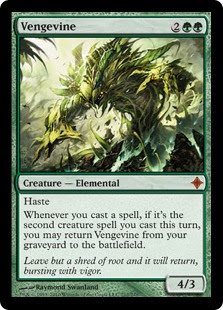 No pernicious Deed may stand out as obscure and tends to only occur in the most agro of Rock builds however with so much utility on my dorks and it not being a dork while killing a few of my engine cards and being a bit slow made me happy to cull it. Had I been facing WW, RDW or Affinity this would probably not have happened. No Death Cloud is more of a surprise as I play that card in anything black pretty much. On this occasion my desire for a low spell count and the fact I was risking it a bit on land count while also having a relatively bulky top end all pointed to me putting aside my love of the card for just one cube and doing the sensible thing.

This is one of the harder Rock decks to play and a very fun build of the deck as you tend to always have lots of options. I had some really good games with the deck and although it did 2-0 as with all Rock decks it was by the skin of its teeth. In fact there has been much debate since about a controversial Elspeth ultimate play in the decider which was very close and could have gone either way. The key to building this deck is to not get over exited about all the different engines and synergies you can put in, I have seen so many decks try to be this deck and a Survival of the Fittest deck, which at 40 card decks you simply cannot do effectively. By all means play a Fauna Shaman if you like but don't then put in Survival, Rootwalla and Genesis and then a Bloodghast and a Liliana and so on.
Posted by Nick Nobody at 06:41