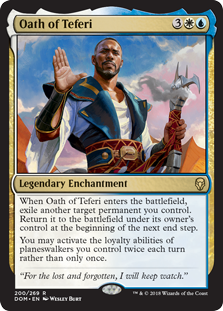 The list I am showing below is not one of my own but one of a friend who savagely handled me with it. My own first take of an Oath of Teferi list focused more on flicker elements and contained things like Brago and Venser (the walker). His list was focused on the more powerful side of the Oath. It also preformed much more impressively hence the article being on it rather than mine! There are certainly loads of ways to go with this kind of deck as with any vaguely UW control looking deck. There are just so many viable cards these days and so much redundancy in many of the parts that you can make a number of very similar decks using mostly different cards. The most interesting elements of an established overarching archetype like UW control are which synergies you are playing, how deep you are going with them and which overlaps you are choosing to make use of. This list is a gem. It has exactly enough of all the core things a control deck needs while still managing to cram in a bunch of cute cards and synergy overlaps. It is also by far and away the new record holder for planeswalker ultimates going off both nominally and per game, with a solid two and a bit ultimates per match! It manages to stay true to the archetype while doing something new and creative and it managed to do it sufficiently well so as to win all the matches. Those things are hard with any archetype, Azorius control I would say is one of the hardest. Here is his list; 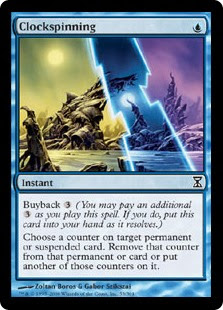 Gideon of the Trials
Savor the Moment
Oath of Gideon 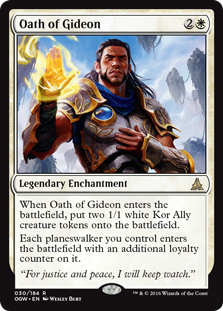 Force of Will
Tamiyo, the Moon Sage
Teferi, Hero of Dominaria
Oath of Teferi 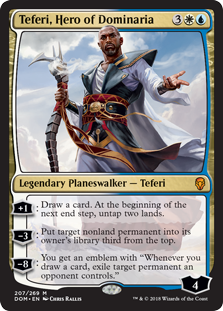 Oath of Teferi is the main build around card in the deck. It is so powerful you can broadly ignore the flicker effect and only support it with four planeswalkers. It is a five mana do nothing that empowers a mere tenth of the deck! The mere fact that such a card is playable should make a good case for how good it is. It turns out that having two goes on a planeswalker each of your turns is not just twice as good as normal, it is far far better than that. Walkers that do more and grow quicker are hard to keep pace with. They are super hard to keep from going ultimate and they get there very quickly if not attended to. It is so powerful that it is pretty much a combo with any half decent walker. Much of the rest of the deck plays into this empowering of the walkers as well. The rate this had of getting ultimates off demonstrates the effectiveness of that game plan and support.

Clockspinning is a great little addition to this list. It has been performing quite well in the drafting cube of late but this constructed list is one of the best places I have seen it in for effectiveness. It is cute with the As Foretold and Ancestral Visions but it is also another way of ramping planeswalkers towards ultimates. It is actually really hard to play against walkers when they can grow a couple of loyalty without warning at EoT. Clockspinning is generally quite a good card purely in a disruptive capacity, it doesn't take much extra from your side of things to make it worth running. It is a lovely way to deal with Hangarback Walker. It is nice for shrinking opposing walkers. It is frequently a combat trick with so many dorks having some form of size modifying counter on them. It is both a late game mana dump and a cheap early interactive tempo play. All round cheap and versatile card. 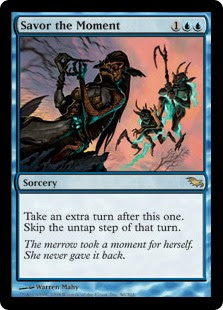 Oath of Gideon is one of my favourite inclusions in this deck. It is the perfect little brother to Teferi's Oath. It makes walkers that little bit more dangerous, it helps protect them and it is a cute little flicker target. Savor the Moment is the spiciest of all the inclusions I would say. It is obviously great with planeswalkers but it also not terrible with a pre-flip Search for Azcanta or a Visions. Also lovely in combination with the As Foretold. Basically at worst the Savor is a Clockspinning and an Explore in one and at best it is totally stealing the game with loads of planeswalker abuse and the potential for free As Foretold mana.

The Elixir was a good call I thought. I might have tried to get away with a Mistveil Plains but then I would also need a white token generating planeswalker to go with it. The deck goes through the library rapidly and wins slowly. It has all the answers but it only has most of them once. It isn't overdone with win conditions either. Value isn't what this deck struggles with and so "wasting" a card on bolstering actual weaknesses felt right. 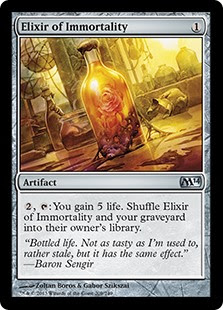 The removal and counter magic suite was spot on. Impressively so. It was well balanced to work with the As Foretold, the curve, the walkers and so forth. It had no gaps and left loads of room for the cool synergy stuff. My friend held a smug grin as he cycled his Cast Out with his Teferi emblem remarking how it was even better removal in the other mode.

The main issue I have with this deck is how hard it is to make room. There are basically no cards I am happy cutting yet loads of cards I want to add in! Most of the cuts you could make would then need replacing with a comparable card. Really they are swaps or tweaks. You could run Mana Leak or Counterspell instead of the Denial. You could run Thraben Inspector instead of the Wall of Omens. You could run Unexpectedly Absent or Council's Judgment instead of the Cast Out. There might be reasons to go for such changes but in this list I really like the balance that has been struck. If you had to make some space I would consider the Renewed Faith. I feel like you could lose a land but it seems like an unnecessary risk. Especially if you are culling cheap cyclers. Losing land probably means trading down Ugin into a Sun's Champion or perhaps a Karn. It also probably just results in the addition of something like an Opt, Remand or even a Signet to somewhat redress the mana balance. So what cards do I want to add in? Loads obviously but a few with rather more merit than others. I think this list wants a tool for dealing with problem lands. Ideally Field of Ruin but Rishadan Port is great too. With 17 lands and so much draw and selection you can easily support a second colourless land in this list. That is the easy include as it is a clean swap for a land. A basic if staying 17 and the Mage-Ring Network if dropping to 16. The Network is mostly for powering out Ugin and with 16 lands he would be toned down to a cheaper walker and thus remove the utility of the Network.

I want to play more planeswalkers so as to take advantage of the synergies. Likely the best options are the known potent walkers. Ideally we could fit a four mana walker in meaning Architect of Thought, Mind Sculptor, Ally of Zendikar or Knight-Errant. The Jace options are a bit more on-theme but generally more vulnerable and harder to deploy. Mystic Confluence is the other thing I really want to find some room for. It is one of my favourite things to pair with As Foretold. I like how it provides gas to carry on exploiting your mana advantage while also affording a good degree of control.

I doubt commander players will be at all surprised at how good Oath of Teferi is due to how much use The Chain Veil sees and how much the thing is! Those who have not played commander however will likely be highly surprised at how massively Oath of Teferi dominates a game. Try it out, just add planeswalkers! It seems you can built with it in many ways and is not as narrow as it looks.