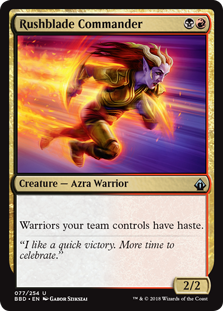 Battlebond brought many new warrior tribal toys which I wanted to try out with the existing ones I have collected over the years. Long have I held onto my Obsidian Battle Axe in the hopes one day it would come good and that day is upon us now! This list is super fair, it is very much not a meta defining deck. Rather than use tribal synergies to propel a deck to doing broken things this list uses milder synergies to turn a motley collection of average cards into a viable cube deck. This list is a little lacking in disruptive tools and a little vulnerable to certain things, like more than one bomb or a bomb at the wrong time, or a mass removal spell. The deck has some very powerful synergies it can put together but they are generally only powerful when on curve and are fairly easily disrupted.

Despite my misgivings this list is competitive. It has some individually high powered cards and some impressive and even unusual synergies on the go. It is impressive when a deck tribal goes from non-viable to  decent in a single set. Really it is just three new cards. That being said, Tarkir block contributes more to the deck than Battlebond, it is just more of the quality filler rather than the more potent synergies What warriors lack as a tribe is not depth or power or even powerful synergies. It has enough of all those. What warriors lack as a tribe is a range of utility dorks. Tribal cube decks typically either struggle to cope with the diverse field due to being too linear or they simply don't have the type card density to make the synergy support for those cards worth it because they are running suitable numbers of interactive cards. This list is the former, I have crammed it full of warriors to take full advantage and it will do fairly well against slower combo decks as a result. It will however struggle against midrange and control decks a whole lot more.

One of the other problems with this list is that it is a bit haphazard in what it is doing. It makes some tokens and has some team buffs but it certainly isn't abusing that pairing, it is light at best. It has some things that give haste but few cards that scale really really well with that. The same is true of vigilance. There isn't one overriding plan on theme that can be pushed, just lots of little ones which frequently don't amount to all that much. 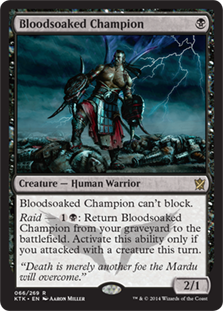 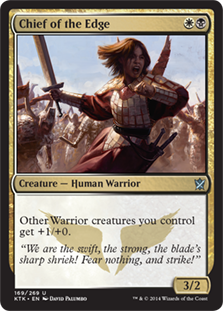 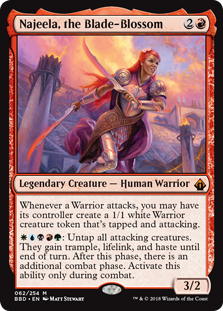 
This is the list of cards I considered using in the design and building process. This shows a reasonable depth within the tribe. 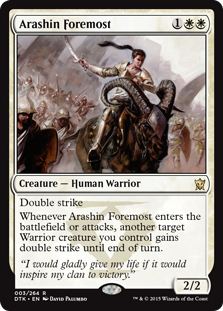 The deck can be refined but it can't be made all that much better without no longer being a tribal warrior deck! The Cartouche is probably the first thing that should go. It might be quite powerful but it isn't really worth it on several fronts. This should be a slot used to help out with the lack of disruption or it should be a card that stands on its own at least. Radiant Destiny was only average, this list is sufficiently fragile that I wanted as many cards able to do things on their own as possible. A couple of the two drops feel like relatively easy cuts as well. Sadly you probably need to replace them with cards of the same CMC, this list is already a bit even on the CMC for my liking and would benefit from being bottom heavy. It is already dangerously even colour split on the one drops just to get the numbers up. 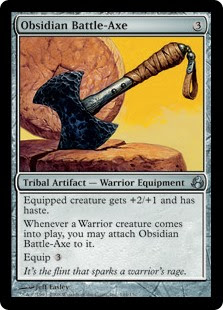 I don't think we need to look in detail at what the cards are doing. The deck is pretty straight forwards and most of the cards are self explanatory, they either are one of the few tribal warrior cards or they are one of the few good on theme warriors, or indeed they are a high powered interactive card attempting to be crutches for the deck. The three new additions are all very powerful. In theory you can even trigger the ability on Najeela in this build although that is more for the EDH community. Here you have probably done enough just churning out a few tokens. Mindblade Render is great but it is a little off theme in this deck, it is more midrange than aggro even though this is the best build to ensure early triggers.

The two standout cards in the deck were the Battle Axe and Arashin and not the newer stuff. Arashin could really pack a punch. I had a few games were I just did someone 10-14 damage out of nowhere. More evasion would really help this tribe but unless it is on a warrior like Blood-Chin Rager then it is going to be a pretty hard sell. Battle Axe just spelled Danger. It turns the weakest threats into serious ones, a 4/2 haste for 1 mana is quite scary! On any of the three drops you have yourself a very impressive card. The auto equip functionality removes basically all the things I dislike about equipment from the Axe. So yeah, a fairly simple aggro deck with some novel cards and novel interactions that isn't terrible! You try and curve out threats and you try and attack with them each turn and you hope that you get there with that plan!
Posted by Nick Nobody at 14:06