Whenever new sets come out I like to build decks that showcase the new cards as best I can. This gives me a chance to test the upper potentials of cards and get some general testing results faster than with just normal play. With Oath being such a powerful, interesting and exciting set I have already done many decks using many of the new cards yet still find myself wanting to try new ideas and different housings for the new cards. This is one such idea that harks back to my first nationals where (standard) Squirrel Nest Opposition was one of the best decks. Opposition decks are mostly creature based and with the power creep it did not take long for cube Opposition decks to look rather dissimilar to what I felt the list was so to speak. 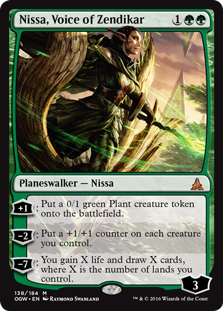 The only cards in that early incarnation of Opposition that remain in my cube to this day are the one drop mana dorks and the Opposition itself. Squirrel Nest didn't last long in the cube at all. Call of the Herd fell out of favour fairly quickly too. Merfolk Looter was probably the last to go ultimately being replaced by Looter il-Kor and Enclave Cryptologist.


Nissa is a pretty good power crept version of Squirrel Nest and seems like she would slot perfectly into an updated Opposition list that uses the old Invasion/Odyssey standard build as a template. There are plenty of other nice new upgrades to old inclusions too such as two mana Jace replacing Looter.

The standard list was usually UG with a couple of UGr versions splashing for Flame Tongue Kavu however cube lists tend to wind up being Bant colours. It doesn't cost you much to play the third colour with a green base, it covers you for removal and offers you a much wider pool of powerful cards to include. 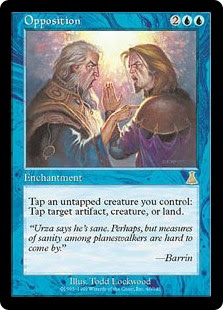 16 Lands (including all 3 dual manlands!) 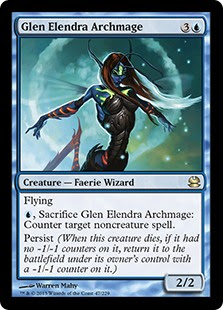 The deck is a very midrange rock style deck that uses cheap creature ramp and follows it up with solid value and utility creatures. Typically rock decks pack more disruption than the Bant versions but the Bant version makes up for this with slightly higher quality creatures and a bit of lockout potential. Obviously Opposition plus any sort of board lead provides a powerful soft lock. There isn't that much instant speed enchantment removal in the cube nor is there even that much low cost enchantment removal. As such you can often turn the soft lock into a hard one. Opposition is not the only soft lock as the persist creatures combine very well with the -2 on Nissa (as well as bounce and flicker effects to a lesser extent). Glen Elandra is pretty terrifying, only decks with higher quality creatures and a higher density of them have little to fear from the faerie! To all other decks she is a serious problem that might even be more dangerous than Opposition. Dromoka's Command might be a worthy inclusion over the Charm to further abuse the +1/+1 counter synergy.

I strongly considered putting Warping Wail into the list but ultimately couldn't be bothered to figure out the mana base for it. Not having enough testing on the Wail yet either makes me less inclined to proffer strong opinions on it too. Even so, it covers the deck very well for several of its problems. Firstly, cards like Grim Lavamancer. Opposition doesn't do much to stop the use of a Grim and it can control your creatures very effectively. You want Grim dead but have few tools to do it with. The other trouble this deck has is with Wrath effects which Warping Wail also sorts. The deck is already built to be as robust against these problems as possible with recurring dorks, flash dorks, planeswalkers and so forth but they still hurt!

The deck doesn't need to draw Opposition to win by any means, a lot of the time you will just play better stuff, get better value and win. You can answer most things in a selection of ways and can push for wins in different ways too. You can mess about with things that make it more likely to see the Oppo but I have never found them to improve the function of the deck nor its consistency overall. 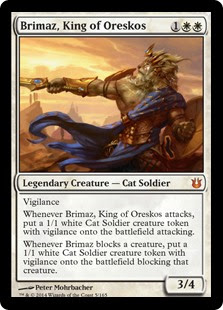 Brimaz is one of the best creatures you can play with Opposition. The combination of vigilance and of generating (vigilance) tokens when he attacks puts games out of reach very quickly. Elf, Brimaz, Opposition is good games against everything that fails to deal with either of the latter two cards on sight. Brimaz attacks, makes a token and then both of them can tap something down if needed to ensure their survival. If Brimaz doesn't need to tap he can threaten as a blocker and then tap after your opponents combat. Even if you make lands and stuff every turn against Brimaz/Oppo and the stuff you make is sufficiently good that they all require tapping nonstop you are still rapidly falling behind. You are expending all your mana and cards just to keep near even while the Oppo player has all their resources free to further extend and lock you down. The biggest issue with Brimaz is that he is double white therefor making your mana base rougher. Other vigilance creatures are nice too as they can apply pressure while locking down the game even if they don't just win it if unanswered! 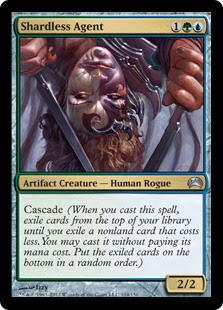 You might think Garruk is an odd choice of planeswalker for this list as he can't pump out tokens nonstop to abuse Opposition. My experience is that Garruk is a much more rounded package than the alternatives. Often you want to play him turn three and untap stuff to really advance a board where most other walkers would leave you at an immediate tempo deficit. Overrun is really nice in a list with so many creatures and tokens and offers an alternate and rapid route to victory. Elspeth (4 mana) is quite nice unsurprisingly as she is tougher from the outset but she only has 2 useful abilities in the deck compared to Garruk's three. 3/3's for -1 tend to have a lot more impact that 1/1s for +1 as well and that is what the deck wants more than the value of the all round gains from Elspeth.

The list can be unreasonably explosive too should it get the right draw. Elf into Lotus Cobra sacland for three mana to cast Shardless Agent is a filthy good turn two whatever you hit. I have had it hit Coiling Oracle that hit a sac land and let me cast a second 3 drop on turn two. I think I did it with a Temur zoo list and cast a Savage Nuckleblade but that isn't the point, the point is that this deck has those tools and despite looking midrange it can do some really unfair things. It is also incredibly redundant, you could cut half the cards on the list at random and find suitable replacements for all of them that didn't really harm the power or consistency of the deck (another reason I liken it to the Rock). Losing the Opposition might make you build it slightly differently or focus more on abusing something like a flicker mechanic but the point is that you can draft this pretty safely and not worry too much about not getting the right bits for it. Being in three colours, you will pick up enough playables to have a strong deck.