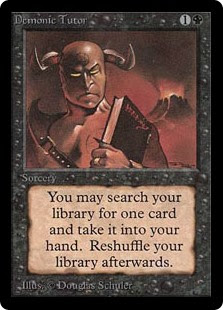 A friend of mine commented on my first pick first pack article enquiring as to why I had no love for Demonic Tutor. Five years ago if you asked me to compare Demonic Tutor to Impulse I would have looked at you as if you were stupid. It would have been like asking me to compare Tarmogoyf and Grizley Bear. My friend is right to question why a card that was a powerhouse and a great first pick has fallen so far from grace so as to not even get a mention in my last essay. Most cards that fall out of favour have been outclassed by newer and better things. This is not at all the case for Demonic, it remains the most rounded and powerful tutor effect in all of Magic. I also harp on about the added value of tutor and recursion in singleton formats, another thing that is unchanged. Demonic Tutor has been very subtle in its decline, as I say, it is no less powerful, it just sees far far less play than before. It was not until I had it pointed out that I consciously realised that a shift had taken place. The reason I have chosen to compare the card to Impulse is because they are both card quality spells and they both cost the same. Critically however Impulse is seeing more play than Demonic Tutor. A surprise, but one I feel I can justify. 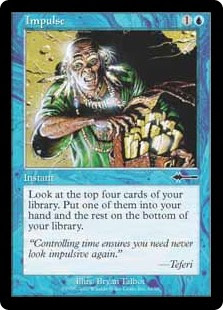 Demonic Tutor is not being replaced by Impulse, for a start they are different colours. The decline in Demonic is a result of the changing meta. Firstly there is far far less combo than before, the class of decks that most desire tutors. More tempo based decks typically prefer Vampiric Tutor if they need such an effect and this has always been the case. Control decks also used to love a tutor but now it seems they can far less often afford the deck slot and the time needed for it. Adding two mana to the cost of any spell makes it a pretty awful spell by cube standards and this is the crux of the problem with Demonic. Cards are more powerful, there is more redundancy and there is more flexibility on cards. Before you might have run Vampire Hexmage, Doom Blade and Demonic Tutor to give you rounded options in your removal however these days you would likely just replace the Demonic with a Hero's Downfall. It is not only cheaper and more effective at killing either a planeswalker or a creature than Demonic Tutoring for either Hexmage or Doom Blade but it also gives your deck the ability to kill more stuff overall. The fact that threats are more powerful does not exclusively effect aggro and midrange decks in regards the demise of Demonic Tutor. Even a control threat which comes down late still gives you very little time to respond from the time it hits play and you know about it. Black is a slow colour, most of its things are sorcery as is the Demonic. This means you will have to wait till your turn to go and get the thing you need and costing you two mana to do so as well which can easily mean another turn before you can do the thing you needed to. Against aggro decks a turn four Damnation used to be a sufficient blow that you could happily waste your whole turn two or three to go and Tutor one up. These days it is much more likely that you will have taken critical damage by skipping a turn or that the Damnation doesn't get it done as well as you would like. Put simply, you do not need Demonic as much as you used to because there are more tools and versatile cards that can help you do more of the things you want combined with the fact that it is becoming increasingly dangerous to spend two mana at sorcery speed that has no tempo gain at all.

The question then becomes "why is Impulse seeing more play than Demonic Tutor?" Both costing two and both being one for one card quality spells yet Demonic offering vastly more choice and therefore performing its role that much more effectively. A large part of it comes down to the difference between instant and sorcery but that is not the whole storey. For one, it is the fact that blue tends to be more instant based in its responses that allows you to painlessly play cards like Impulse. If Impulse were exactly the same but black it would see a lot less play again because so many of the things black wants to do are sorcery. You would not frequently want to leave mana open and so the black Impulse would often sit in hand until you were forced to play it in your turn any way. Impulse works very well with Countermagic, it lets you represent and it lets you still spend your mana should you not need to use it for counters. This is not a general synergy that black has to work with and so the discrepancy of play between the cards is more on the colours themselves and less about the actual cards.

There are more reasons Impulse has a more secure place in the cube than Demonic at present. One of them is prowess style effects. Impulse becomes a cheap and painless enabler for such effects and lets you be far trickier with them because it is instant. As such you are playing it because it is good with your other things and not because you need card quality. Another consideration in favour of Impulse is that it grants more information that Demonic. Never underestimate the value of information. Putting three known cards on the bottom of your deck is a surprising chunk of information. It rather drastically changes the probabilities of your drawing certain things. Not only do you now know of three things you can't draw, your unknown library is that much small thus increasing the odds of the things you can draw. Three cards in 40 cards decks is going to be 10% of your library minimum and gets significantly more so as the game goes on. This in turn makes it yield that much more information. Demonic Tutor gets worse as the game goes on, when you only have four cards left in your deck it is the same as Impulse in terms of the card quality you instantly get. It does not however leave you with any extra information nor is it instant. If you ignore the speeds and colours of the cards I am not exactly sure what size of library is the size at which Impulse becomes more valuable than Demonic, certainly it is greater than five but by how much it is really hard to say. It will also be different in different decks and even against different decks I imagine. The exact cross-over point is not all that relevant, the fact that it happens is the more pertinent insight. I would also argue that the value in their card quality is not that significantly in favour of Demonic in the early game either. A turn two Demonic is usually for a land and if not it is for a three or four drop to keep you curving as best you possibly can. If you are only looking for a land Impulse is very close to as good as Demonic. Impulse also has decent odds of being comparable if you are just looking to curve out more optimally. Demonic only drastically out performs Impulse when you are searching for a very specific thing which, with the decline of combo and the increase of utility, is a service no longer required.
Posted by Nick Nobody at 06:39