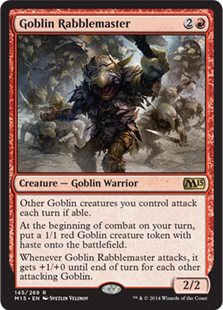 So it turns out I can't read. My review for M15 rated this as C cube at best because I thought you needed to attack with it before getting a token. The seemingly minor upgrade to having it make a 1/1 each combat turns the card from a C cube dust collector to an A cube staple. A card that can attack for 6 the turn after you make it for only 3 mana is good, the extra one on the turn you make it is nice. Left alone the damage will soon be too much and even if dealt with you should have some tokens left over for bonus value and damage. He is fairly easily blocked and killed however you will usually kill whatever blocks it and have already done reasonable damage while still having two 1/1s to show for your investment. His drawback of forcing attacks is minor, it doesn't affect him nor any other non-goblins you have. Goblins typically want to attack as well so the chances of this costing you card advantage or tempo are minimal. Rabblemaster scales really well with other goblins, despite his drawback, of which there are plenty in the main cube and a beastly set of tribal cards to really abuse him in the reserves. This guy will be decent in any vaguely aggro red deck which is something red somewhat lacks. Prophetic Flamespeaker requires some building around to be that exciting, as does Chandra's Phoenix which are the only other red three drops that see regular cube play. Rabblemaster is a much higher impact card and is very powerful in a vacuum unlike the other options. A big card for red despite being unlikely to see control play, he just has so little competition in the three slot and offers so much that basically every red aggro archetype will be happy enough to play him.
Posted by Nick Nobody at 15:40