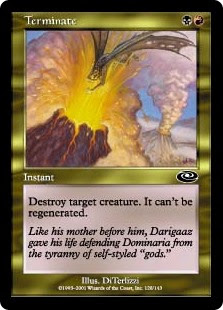 Rakdos until very recently had some of the weakest gold cards going. For a long time Terminate was the best Rakdos card and quite how bad it is compared to some of the mono coloured removal in the cube just shows the weakness of the cards they had at the time. Black red was also one of the very few colour combinations that had basically no competitive archetypes for a long time, obviously not helped by a lack of gold juice to power up the option. First we got Redcap who was cute, then we got Blightning and that had value and then the floodgates opened piling on top quality cards faster than I could add them to the cube. So many good four drop dorks that clearly powerful new cards like Exava, Rakdos Blood Witch haven't even had a look in yet. Although Rakdos has now got some juicy cream at the top of its pile it has a sharp fall off in quality for the cube after about 7 cards and made the list really tricky. It is certainly the case that the Rakdos top 10 has the youngest average age of card. Starting at the bottom for once, Fulminator Mage just makes the list and was a very close call between Wreaking Ball, Void and Bituminous Blast all of which see infrequent play and are fairly unexciting low power cards. The Mage offers some security against awkward lands and some disruption potential on an easy to cast body that ensures you won't ever have a dead spell. Sadly three mana land kill is almost as lacklustre as a Grey Ogre in cube and so even when you really want all aspects of the card within your deck it still doesn't excite or even impress that much.


Terminate was directly replaced by Dreadbore and I have never looked back. I always felt so resentful when playing Terminate that it was so much worse than Path and Plow, at the very least I felt I deserved an exile effect or something. Despite this is was and still is one of the most reliable and most effective removal spells in magic. It has probably seen more play that any other card in the top ten list simply because it has been in the cube so very much longer. Although I am glad to be rid of the card it is unlikely that it will ever be out of place or weak within a cube. 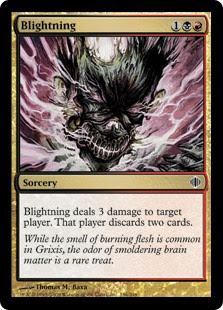 Anethemancer is the last of the filler spells on the list than basically see no play in the cube these days. While quite a potent damage dealer come value card the cube is a little to fast to really suit this guy, even with my absurd non basic land count. Against any agro deck he is a poor tempo play, even when you get to shoot them for three or four you will still generally lose tempo over a deck making plays that impact more on the board with their three mana. This made Anethemancer an anticontrol card which a red deck would probably still use if it were not for the fact black tends to have cheaper and better anti control options.


Blightning is an odd card, a very cheap two for one with a little one off tempo kicker. Although discarding cards and doing direct damage are somewhat at odds with each other it winds up making the card playable in most archetypes. Being able to whack loyalty off planewalkers is the big win for Blightning but even when it is just going to the dome and not affecting the board at all you are able to get in your good value two for one without sacrificing much if anything in the way of tempo. Rakdos Cackler is the new Tattermunge Maniac, it is much weaker than most of the other aggressive one drops in the cube however it is so convenient it winds up getting more play than a lot of the others. One drops have a much higher coloured mana requirement than more expensive spells and are therefore that much more inclined towards incurring a colour screw. One drops of this kind are included in your deck because you want to cast them on turn one. Simply by being able to be cast with two sorts of coloured mana make the Devil significantly more consistent than a Goblin Guide or Diregraf Ghoul in a two or more coloured deck. It is also incredibly splashable into a mono black or red deck which further increases the amount it is played. On the agro not being able to block is basically irrelevant and so an easy to play one mana 2/2 with no further drawback is about as good as you can ask for. Later on in the game where a cheap small dork is weak and where an inability to block is far more relevant you at least have the option to make as a 1/1 which may sound awful but is correct surprisingly often and makes the card far far better than a straight 2/2 can't block would be. Falkenrath Aristocrat is a bit of a beating with four power, haste and evasion offering a scary clock or a great answer to a planeswalker for fairly low mana investment. Sadly there are not many decks that want this kind of midrange card over the alternatives within the cube. The Aristocrat requires you to have other creatures in play so as to negate the single toughness and be able to really abuse all aspects of the card. Ideally many of these would be humans but this is not essential. Aristocrat is also a much more aggressive monster than it is a defencive one and black red aggressive decks don't overly want lots of four drop dorks.


Rakdos Charm has been the black horse of the guild charm cycle that really outperformed expectations. While not as powerful as Selesnya Charm nor as widely useful as Dimir or Izzet Charms the Rackdos Charm manages to offer a lot of new and highly useful things to Rakdos and gives a lot more reach and potential to the colours as a result. Artifact removal is a wonderful thing to have in a deck but often costs you power to do so, you will downgrade a solid threat into a Torch Fiend or something and although it will outright save you or win for you in a couple of games it will be highly underwhelming in the rest. Rakdos Charm is cheap and instant artifact removal therefore trumping things like Torch Fiend in that role yet in its other, perhaps more situational uses the Rakdos Charm is not nearly as dull as a 2/1 for 2 offering you far more power. Exiling graveyards is narrow but effective against a fair number of cards and provides a much more interactive game with something like a reanimator deck. The final ability is the tricky one that at first glance seems really naff however actually works out to be powerful and versatile. Not only is it often quite a lot of damage to the dome as a finisher it is also a pretty solid answer to the various token generating planeswalkers. Murderous Redcap is a monumentally annoying roadblock. I have seen it go four for one on too many occasions to still think the card is cute. It may pack less removal power and board presence than either Flametongue Kavu or Skinrender however its lingers round being annoying and costing you tempo far longer than the others. As such it is far more of a control card but then again it will work fine for you in your agro deck if you need the cards. Best thing about Recap is abuse with Wolfir Silverheart and cards like Birthing Pod and Recurring Nightmare. He also gets props for being a hybrid making him that much more playable.


Olivia Voldaren is one of those cards that you really struggle to lose with if you get to untap with her in play. She makes any Masticore you care to chose look impressively weak. She is a card with effects and power that you expect to find on expensive legends like Visara, Memnarch, Bosh and Drana however she is only four mana putting her very much into a different category of card. She has no drawbacks at all and is a perfectly reasonable body for the mana cost should you never be able to invest mana into her abilities. All this on a card that is often in play by turn three and will give you vast control over the board. Kill their small things, steal their big things, attack their planeswalkers to death all the while growing into a bigger scarier harder to kill threat. 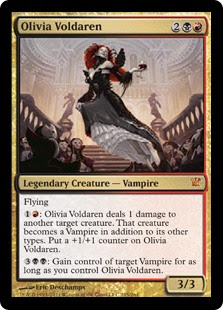 Despite the ludicrous power of Olivia the top spot has to go to Dreadbore for me. Two mana to kill any creature or planeswalker is about the best you could ask  for in removal, particularly in this meta. Dreadbore will never be dead unless we revert to a combo dominated meta, as it is it is better than Vindicate 95% of the time. I play it in every deck I make that has sufficient quantities of black and red mana. Sure, instant would make it a whole lot better and put any interest left in Terminate to bed but if you really want some instant removal play a Doom Blade or a Lightning Bolt as well, it's not like your ever going to not play the Dreadbore. Cheap, versatile, reliable and effective, all the things we want from our magical spells.


The list of B and C cube Rakdos cards is a little bigger than those included however many have yet to see a single maindeck inclusion. Many of these have only had a single outing as far as I can recall and as you can probably tell a lot of those in very specific combo style decks. Rakdos is impressively shallow... 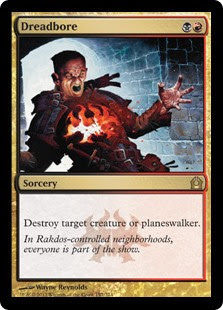