Right, as both I and apparently the wider Magic community seem to love a top 10 list I am going to do a series of 10 lists, one for each of the two colour pairings. Although not all the cards are linked with the Selesnya Guild it does seem the easiest way of referring to each combination rather than the dry WG label. Compared to other "gold colours" Selesnya is by far the deepest in terms of cube playable cards. This seems reasonable as white and green don't offer each other much that the other colour can't do on its own. It is the juicy Selesnya cards that tempt you into trying out WG decks. 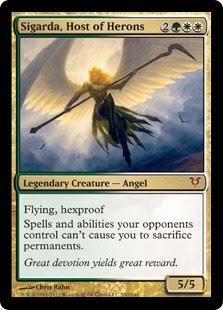 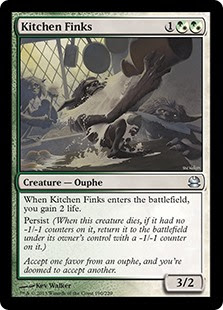 Finks may not be the outright most powerful within the list however it is a staple in almost any deck able to support it. It is value and tempo simultaneously therefore working very effectively in both agro and control decks. It is hard to go wrong with Finks as just a dork but he also has a selection of combo applications. Voice of Resurgence is a complete joke of a card offering disruption, value and a fairly serious threat as two mana cards go. While arguably more powerful than Finks it is less all round playable due to being far harder to cast and far less appealing in the more control style decks.


Qasali Pridemage is a top rate utility dork that is fantastic at all of its various roles. Prior to Pridemage Viridian Zealot was in the cube for which the comparison is a joke. As an agro dork rather than just as security against pesky artifacts and enchantments Pridemage also excels, often times being more effective than a Watchwolf due to the haste like nature and scaling potential of exhalted. Knight of the Reliquary is one of those cards that is less powerful in the cube than in other formats as you cannot easily support all the most useful lands to fetch within a cube, nor can you easily fit optimal packages for the Knight within a 40 card deck. Despite all this it is still a very strong card with ramping and fixing utility regardless of having any clever lands while also being a very potent threat as the game progresses. Synergy with landfall mechanics and other cube cards help to increase the value of the Knight but as a utility threat it is slower to be useful than Pridemage and requires tailoring your deck more to do so as well. 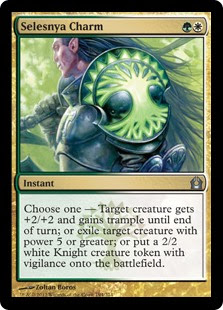 Selesnya Charm is an incredibly powerful card that has been a real boost to the Selesnya pairing offering it a great deal of options and coping power without clogging up decks. Of the recent charm cycle it is the most powerful by far and is only really let down by a lack of archetypes that want it compared to the other good ones. Gaddok Teeg is a very powerful but very specific dork that is the bane of many decks while being little more than bear against others. As such I tend to only play him in very specific decks however I can totally appreciate the merits of throwing him in any old Selesnya deck so as to increase the potential of a limiting set of colours.


The age of Wake is passing as combo decks struggle ever more with the increase in power of control and agro strategies stretching combo too thing to strongly compete. Wake is a lot of fun and a lot of power however it is a precursor card that has no impact until you use other cards which at five mana is a tall order. The effects are also somewhat at odds as you rarely have many relevant guys out when tryign to abuse the mana and vice versa should you have lots of guys to benefit from the pump you wont have much use for a personal Mana Flare. The Mana Flare is the aspect most used from the card but even then combo decks are typically better off going for the faster cards like Heartbeat of Spring should they need such effects. My hunch is that nostalgia is the biggest part of why this spell is so frequently found and played by people in my cube. 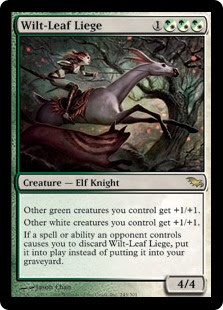 Dryad Militant is an unexciting little card that has very little synergy with any of the decks that might want it due to a poor creature type. It is also not unknown for the little bugger to cause your own deck problems with its graveyard disruption. Despite all this it is hard to argue with a 2/1 for one complete with flexible casting costs and built in disruption suitable of dealing with some of the most annoying cards in the cube like Snapcaster Mage and Lingering Souls. Wilt-Leaf Liege is a surprisingly good card that fails to get much limelight due to having no constructed successes nor looking all that compared to the best Selesnya has to offer. He is however a strong multi-purpose card that acts as disruption when against discard (which is a surprisingly large number of decks in the cube), a decent threat on his own and a strong pumping effect to end your curve with. The wording is such that if you curve out with cards on this list such as Militant into Voice into Knight each will receive +2/+2 for being white and green and will really bring the hurt. As such he can often be the top end of choice in agro Selesnya decks.


Sigarda, Host of Herons is a bit of a tedious card as she is incredibly hard to deal with while somewhat hosing any black mage out there. As Mutilate is not in my cube black can only kill Sigarda with Damnation or in combat. It is a bit like Gaddok Teeg in that it is brutal against some decks and just a dork against others however 5/5 fliers do rather a lot more than a vanilla 2/2 does. Sadly at five Sigarda is too costly to be played as a disruptive card or as a threat in any but the midrange style of deck and so doing both doesn't win her many deck places. Powerful and often game winning, just not often played or playable.

As I mentioned, Selesnya is the deepest of all the guilds and so to illustrate this I have compiled a list of every Selesnya card that has seen multiple outings in decks from within the B and C cube, or in some cases cards that held A cube slots in the past when creaturs were all a lot worse. I am certain that Watchwolf for example will never see play again as dorks have so greatly surpassed it however it was in the A cube for over a year after first seeing print. This list, if even present for some of the guilds, should be noticeably smaller. 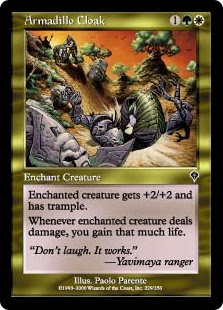