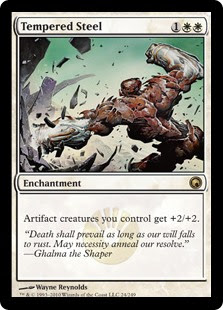 This is the other popular variant of affinity although it far more resembles the robots style modern deck. It makes lots of fast and annoying dorks with a few high powered synergic finishers to round it out. It has less mana issues than the other affinity cube deck I posted. It is also less prone to not drawing enough dorks however it relies fairly heavily on a couple of cards to win games and can misfire easily enough through not seeing one of those in much the same way. Being only really white you miss out on some of the juicy coloured cards available to the archetype. Also you have more non-artifact cards than most other affinity decks which can present some issues as well. Beyond these somewhat minor differences the deck is essentially the same as any other affinity deck, it makes over powered and undercosted dorks on mass and then finishes you off with combat trickery or evasion if the initial tempo surge wasn't enough to outright kill you. 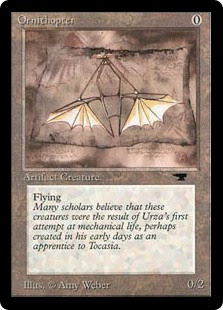 This list hails from a time before I banned Mana Crypt which does hurt the deck a fair amount but isn't enough to stop it being tier one at all. I would be fairly happy to exchange it for a variety of cards including Chrome Mox, Aether Vial, Terrarion, perhaps even a  Mox Diamond or just another dork..

Overall it is one of the more robust builds of affinity as it has some removal, some disruption, some card advantage while being less vulnerable to things like Pernicious Deed. You also typically have more evasive monsters in the heavier white builds due to the Glint Hawk however after playing the deck it was the most cuttable card by far and would likely have been better as the Idol instead.

Stoneforge Mystic is a real boost to the build giving you the ability to get your choice of incredibly high powered equipment. Despite having slightly few artifacts than alternate versions the Cranial Plating is just as good in this build due to the extra evasion and so having two chances to draw one rather than one is excellent. Inkmoth Nexus is also at the best it gets in this deck as it has multiple copies of the Plating to abuse and becomes a terrifying 3/3 if Tempered Steel is down. 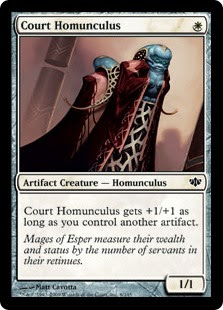 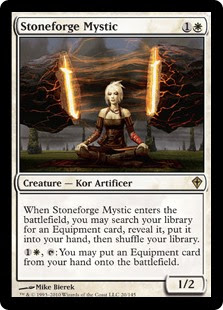 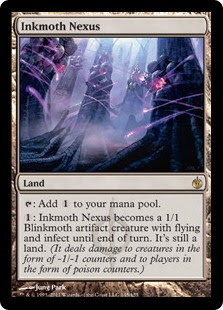 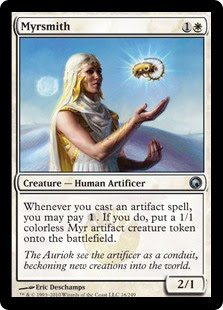 The Myrsmith is a bit of a luxury card as it is slow, awkward and vulnerable however it does work very well will a wide number of the cards in the deck while being more useful and proactive than a Thopter Foundry (not to mention easier to play) and less risky than a Genesis Chamber. Steel Overseer is much the same sort of slow optimistic card however you really want a high dork count of a cheap artifacty nature of which there are slim pickings. It actually doesn't matter all that much, you could play a fairly wide selection of cheap junky dorks that did nothing much at all beyond getting pumped by Tempered Steel and you would still win most games in which you drew it. I was going to use Golden Myr as an example of a junky card that would work but as I thought about it I realised it would probably be better than a lot of the cards I actually did play....

I don't recall having ever given specific matchup advise for a deck in this sort of post but I feel compelled to do so with this one, more so because it is unique to the deck and therefore perhaps less intuitive. When playing this against red deck wins or a cheap heavy burn based deck the best strategy is to hold back making dorks in the early turns. If you play them out they just get burned away and you run out of steam having done very little. Ideally you get to make a turn three Tempered Steel and then follow it with the mighty Ornithopter that turn and a couple more random artifacts on the following one. Playing like this means they cannot efficiently burn away your threats nor can theirs compete with the size of yours. You will be a few life points down but will have the board and resources to comfortably win. If you don't have the Tempered Steel it is pretty bad for you in that matchup to the point of it being worth trying to stall while retaining some dorks just to try and draw it. 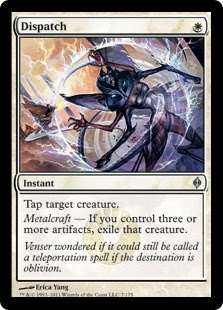 With mid-range decks all the rage at present this sort of deck is a perfect meta choice as it crushes them in a hilarious manner. Often they have cast one or perhaps two very low impact spells that you basically ignore while you cruise to victory on the back of an absurd tempo lead. Not only is this deck fantastic against mid-range decks of all flavours it is also potent against anything you care to throw at it. It is fast enough to keep up with combo decks and powerful enough to overwhelm control decks. It also seems to cheat compared to other agro decks and leaves many of them wanting as well. It is good fun to play and nicely different, even compared to other affinity decks which are seeing little play as it is in my cube with the components no longer residing in the A cube.