Right, well, I got this card horribly wrong in my review of Dragon's Maze and much of that was down to me reading it wrong. I assumed that the token you got checked for other creatures you had while the ability was on the stack and then came in at that sized fixed. This of course would mean if you had no other guys it would die instantly as a 0/0 and would also mean if it was made as a poxy 1/1 or 2/2 it would stay that way rather than grow as you re-establish your board. Suffice it to say I have now properly read the card and played with it a little and my "2.0 B cube" rating is harsh and frankly wrong. You always get some value out of this dork when it dies making it good in all matchups and at all stages of the game unlike how I originally assumed it worked where it is a weak early play and poor against mass removal effects. This card has so much effect on the game and is such a good value dork for the mana it is well worthy of a permanent cube slot. It is very easy to slip in past counter magic and very disruptive once in play against that sort of deck. The problem with many disruptive dorks like Gaddok Teeg is that they are not abusive tempo cards and also die very easily often conceding card advantage at the same time to something like an Arc Trail. This you will play because it is good regardless of the disruption effect and sometimes it will be abusive because the disruption is working out for you while at worst it will just be a variation of Stangleroot Geist rather than the Grizzely Bear that Teeg becomes in that situation. 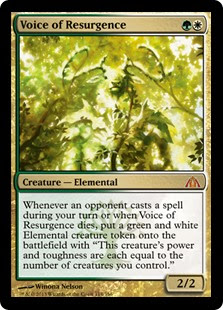 While this is the most powerful card per mana in Dragon's Maze by a reasonable margin I still am confident in will shake things up far less and see less play than Blood Scrivener as it is less well supported and a bit more niche. Despite the Scrivener taking the number one slot for cards in the set this jumps right in at number two up from not quite making the top five in my original assessment. Voice has given a huge boost to the hate bears archetype and will probably be a zoo mainstay as well. His generic high power level will see him into most WG denial decks and for his synergy any Birthing Pod deck in white will likely throw him in too. White green always used to be a colour pairing that had to fight very hard to form viable cube decks and was probably the second least played colour pairing after black red. Recent sets, but in particular the Return to Ravnica block, have gone a long way to making both of those colour combinations a lot more appealing with some very powerful gold cards complete with some invaluable coping abilities. Both Selesnya and Rakdos charm have been highly impressive since their addition to the cube and offer a great deal of flexibility to a wide selection of decks in those colours. It gives what used to be fairly narrow and rigid colours the kinds of effects they need to be able to compete in a metagame as diverse as cube where you can be facing brutally fast agro decks or combo decks utilising all manner of odd engines and hard to disrupt effects or incredibly efficient control decks with solutions to everything. Voice is pretty huge for WG as a colour pairing as it is above the curve in power yet very effective against a broad selection of archetypes, it will really help even out the favourability of the ten colour pairings. Lingering Souls and Vindicate have been keeping black and white buddies in this way for a while, without them the colour pairing doesn't have all that much going for it yet they are powerful enough allures all by themselves to offset the clumsy nature of the colour pairing. Kitchen Finks is still the best WG gold card but alot of that is down to the hybrid mana. Knight of the Reliquary and Qasali Pridemage however may both be knocked down a space by Voice. They offer more utility and perhaps fulfil more roles than Voice but neither pack quite as much power per mana ratio as Voice.