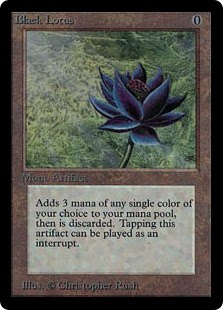 In previous articles I have been fairly critical of the MODO cube however I think I have been overly harsh, especially as they are continually changing and improving it. Even if they were not it is nice to have the option of cube drafting and is a good thing regardless. I am most impressed with the latest version they have given us complete with the power although not for that reason. The power itself is a good laugh and leads to some crazy games but will always be a little more random. Fun is always a good thing to be trading predictability for as games are supposed to be fun and the cube is not too serious for competitive play yet either. A lot of the chaff cards have been culled, the fixing has been increased and the reduced size of the pool enables greater consistency of archetypal drafting. I still sorely miss Death Cloud and am surprised to not be seeing Fastbond on the list yet despite this it is a very fun and very well rounded cube list. The prizes changes since my last article are also a bonus and make it much easier for people like myself who only wish to cube to do so. 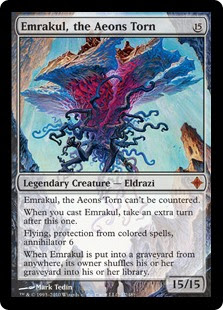 I have only done four drafts with the powered MODO cube and so am not in a great position to lay down the knowledge. I have also not worked out the meta shift as yet, in my cube the addition of the power made everything a lot narrower, the tier 1.5 decks became unplayable, the agro decks all needed to play outs and take risks to do busted things so as to be able to keep up and the decks that could best abuse the power cards became the dominant decks. Overall I would generalise by saying that adding power to my cube list significantly reduces the converted mana cost of decks (even if you remove the power cards themselves from the equation) and reduces the number of cards that see play. In the modo cube the opposite seems to be happening where decks are becoming much higher in converted mana cost and the whole pool is much more playable. I have faced a lot of decks that simply try to quickly get out broken threats such as Channel plus Emrakul combo or just loads of artifact mana and high end bombs. I think these are great decks but I think they are over populated at the moment and that a draft shouldn't support more than two such decks. They are hard to reliably draft and will leave you with an inconsistent pile of junk a lot of the time. The environment is much better set to exploit these kinds of deck with the more consistently draftable archetypes in my eyes.

The best way to put this is to say that the decks that can most abuse the power like the batty combo decks and the huge quick threat makers will either be 9 and 10/10 decks or they will be 0-4/10 decks. Things like white weenie will always be in the 5-8/10 range and can easily be drafted to have the required outs to the bomb archetypes. You are relying on consistency to beat the broken decks most of the time with your "normal, fair, make a land and a thing then pass the turn.dec" and so ideally want to be proactive. One of my four drafts ended up being a rock deck which was very good but entirely the wrong deck for the new meta. Rock is fair and it is slow and clunky, it can cope with most other forms of fair deck but frequently just folds to an awkward early threat. The main problem with rock is that it is not very aggressive and so gives the bomb decks enough time to get over any inconsistencies in their draws. In other words the delay tactics and consistency in my rock deck were good but not enough to outweigh the slowing of my kill clock. A white weenie deck should always be able to goldfish for around turn five and this will pick up a lot of free wins. 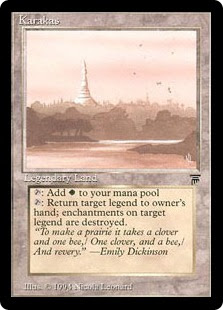 The way to making a white weenie deck better equipped to deal with the bomb decks are reasonably subtle yet highly effective. Path and Plow were already amazing but have managed to go up in value with absurd bombs landing all over the place. Disenchant is now not only main deckable but also a pretty high pick. The ability to take out key mana artifacts or big artifact threats is a huge stumbling block for the big threat decks and most creature based decks try and pack some equipment so it is rarely a dead spell. Karakas deals with an awful lot of the big threats and if they are being cheated into play it is even more brutal. I am fairly happy letting my opponent just have an extra turn when I bounce their Emrukal after they paid most of their life to Channel it out. Stripmine remains one of my top picks in the format, I will take it over almost anything non-powered and later in the draft when I know what archetype I am in it will get picked over power often enough. So many free wins from a card so hard to play around or deal with that fits so wonderfully as disruption in any consistent agro deck. The cards we need to cut from our agro decks to fit in all these cheap disruption effects are the most powerful ones! Things like Baneslayer Angel are just too slow and will either do too little when they come out or will sit in your hand while you crush or get crushed in the early turns of the game. The majority of your standard dork type threats want to cost one and two mana and this feels like it should be the case for most decks trying to win by curving with dorks. 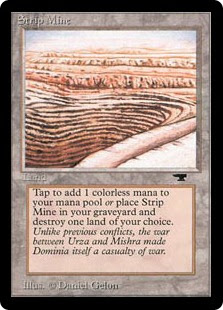 The thing I noticed most in my first three drafts was that red deck wins was always both there and undrafted and that had I taken those cards my deck would have been much better. In the fourth draft enough was enough and I first picked Sulphuric Vortex over Mishra's Workshop and never looked back taking things like Grim Lavamancer over Tolarian Academy. I did foolishly pick up a Sol Ring and probably miss-built my deck as a result. Red deck wins is not one that abuses the power that much, colourless mana is not that useful and every card not dealing damage is less consistency. The only piece of power that is really a high pick for red deck wins is Mox Ruby, even Black Lotus often does less than nothing and costs you the game by not being a Shock... If going for red deck wins you should be prepared to pick Goblin Guide, Strip Mine and Lightning Bolt over Sol Rings and Ancestral Recalls. 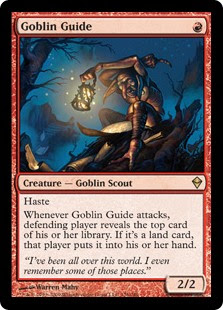 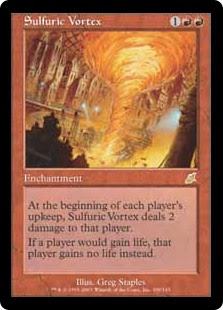 Koth of the Hammer 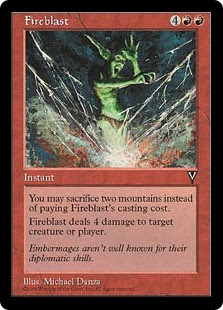 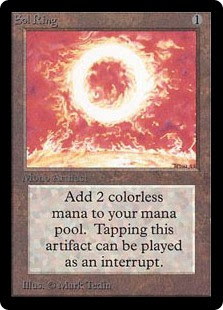 My list ended up more creature heavy than I would usually like a red deck wins to be but it did mean I could play my Big Equipment helped along with the Sol Ring to power it out. I also ran Koth because of the Sol Ring. In a fair number of games I took out both the Sol Ring and the Faithless Looting so as to ensure I wasn't losing any card advantage. The Mizzium Mortars came in a lot simply to up my burn quota and in hindsight it would probably have been better to have it and something else main instead of the Sol Ring and the Looting.  This however would have made me a lot less happy to play both Sword and Koth and would mean I would have to bring in some very sub par cards from the sideboard to replace them. That said it was incredibly consistent and had enough tempo and reach to finish games off well. It looks light on disruption but what it has barely effects it and makes all the difference in a lot of games. The deck didn't drop a game despite having some very close call games against things like turn two Sun Titans from the guy with the Black Lotus and several other bits of power and would be my vote for the best archetype.... still. Best and most powerful are not to be confused however, the most powerful archetype has bomb like blue cards and loads of artifacts and lands that unfairly ramp but it is not the best because you will rarely be able to get all the right combinations of the pieces. Four drafts is a long way off a sensible sample size however and I could have just had good luck with my red deck wins and happened to play against a lot of clunky big threat decks in all my drafts. I believe red has such reach that it is a deck than can be a 9/10 or even 10/10 while still always managing to consistently average a 7/10.